Mayor de Blasio said Tuesday that the city must open approximately 90 new homeless shelters in order to reverse a 35-year trend of steadily increasing homelessness. But the ambitious proposal, which entails adding new shelter stock so that expensive and unpopular hotel and cluster site shelters can be phased out, will require persuading skeptical communities to accept more neighborhood shelters during an election year.

If all goes as planned, the mayor said, the overall shelter population would be reduced by about 4 percent: from an estimated record 60,000 today to 57,500 in 2022. The city's overall shelter stock would also drop 45 percent, albeit at a slower rate than previously promised. Cluster apartments—a Giuliani legacy that costs the city as much as $3,000 per unit, per month—would be phased out by 2021, adjusted back from 2018. The city would ideally stop renting out commercial hotel rooms—a costly, temporary housing option—by 2023.

Both types of shelter have a reputation for inadequate services and poor security; according to the city, 10,000 people currently live in cluster apartments, and 7,500 in shelters: close to a third of the total shelter population, combined.

The proposal "does not take us to nirvana by any stretch of the imagination," de Blasio said. "This is a blood and guts war strategy."

Some advocates said Tuesday that they were impressed by the mayor's candor. "For the first time in a long time, there's [a mayor being] honest about the fact that the homeless population is growing," said Catherine Trapani, director of Homeless Services United, a coalition of 50 non-profit service providers across the city.

But new shelters must open before others can close, and recent battles over shelter placement suggest this won't be easy. In Maspeth, Queens, DHS ultimately tabled a proposal to convert a Holiday Inn Express into a 110-bed shelter in the face of protests. Instead, the hotel rented out 30 rooms to DHS to temporarily house homeless men. Around the same time, Bed-Stuy residents protested a proposal for a fourteenth shelter in their district. Community Board 3 district manager Henry Butler told Gothamist that, "Communities of color have always been a dump for homeless shelters"—a trend he described as "racist politics." 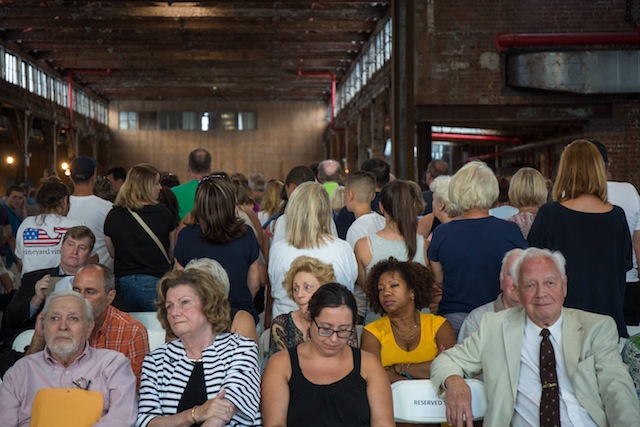 Queens residents turned their backs on Commissioner Steven Banks when he attempted to pitch them on the merits of a neighborhood shelter last fall (Scott Lynch / Gothamist).

The Mayor's plan hinges on keeping homeless families in the neighborhoods where they lived before entering the system, and does not call for decreasing the shelter count in the city's most shelter-saturated neighborhoods (according to a recent City Council study, neighborhoods of color in the South Bronx, East Harlem, and Coney Island and Brownsville in Brooklyn.)

"We're going to ask each community board to do their fair share," de Blasio said. "For some that might mean a very small facility. If they have thousands [of homeless], we want people to have that capacity in their neighborhood."

"We don't have rose colored glasses," said Deputy Mayor of Health and Human Services Herminia Palacio. "We know that some of those discussions may be difficult."

The first of the 90 new shelters is scheduled to open in Crown Heights this spring—a 132-bed shelter for families. This would be in addition to a shelter for about 100 homeless men slotted to open in the neighborhood next month. On Tuesday night, three women stood down the block from the proposed Bergen Street location, handing out fliers for an upcoming community meeting on the men's shelter.

"I'm a little outraged," said Michelle Morris, a neighborhood resident of 40 years. "We have families, we have seniors, and this is not the best community to put a homeless shelter because we're concerned about our safety."

The mayor said on Tuesday that he believed the city could do a better job notifying communities of proposed shelters, but insisted, "That does not mean if there are protests we will change our mind." 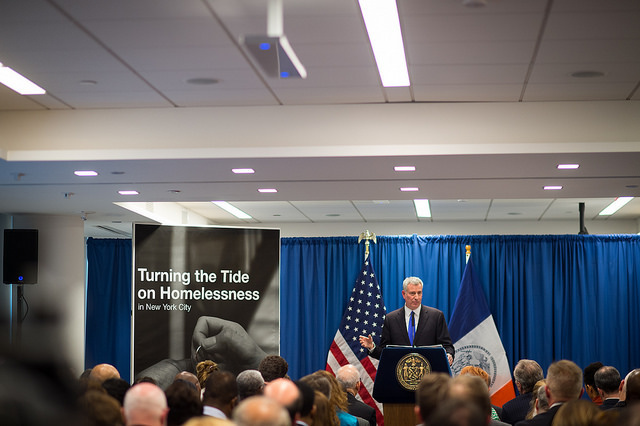 While communities gird themselves against shelter expansion, service providers are also concerned about cost. Department of Social Services Commissioner Steven Banks said Tuesday that the new shelters will be funded using money saved from the cluster and hotel shelter sites.

"You can't close those shelters until the new ones come online," Trapani countered. "So I don't know how that math works."

Trapani estimates that about a third of shelter service provider contracts are out of date, some stretching back to the 1980s. These, she said, don't account for rising property taxes and health insurance costs.

"These are the people you are relying on to get you out of this crisis, yet we can't pay our staff a living wage," Trapani said.

Mayoral spokeswoman Jaclyn Rothenberg said in a statement that, "We’ve worked as fast as we can to eliminate a payment backlog," adding that, "95% of last year's and 92% of this year’s contracts are registered and ready for the payment process."

Outside Tuesday's press conference, a small group of homeless New Yorkers hoisted signs cut in the shape of elephants. "Homeless people are the elephant in the room," one read. The protesters, from Picture the Homeless, said they made numerous appeals to the Mayor's Office to provide input on the plan, to no avail.

"Literally no one is asking for more shelters," said member Jose Rodriguez in a statement. "Homeless people don't want to be warehoused in these demoralizing institutions that break up communities and families. Neighborhoods all over the city are opposed."

Banks countered that the 90 new shelters are "one part of a comprehensive approach," alongside preventative measures like free legal counsel for tenants, LINC vouchers, and the construction of affordable housing.

But critics say the mayor's affordable housing plan is building a bulk of below-market rate apartments for middle and upper-class New Yorkers, and gentrifying low-income neighborhoods in the process. Picture the Homeless has called on the city to utilize vacant properties for housing; Coalition for the Homeless says the city could double its NYCHA set-asides for homeless families, from 1,500 to 3,000—an actionable move while Governor Andrew Cuomo continues to lag on promised funding for 35,000 units of supportive housing.

"To the extent that we can reduce clusters and hotels, that's a good thing," Coalition for the Homeless policy director Giselle Routhier told Gothamist. "We want people who have to utilize the system to be treated with dignity and given proper services. But we'd add that any plan needs to include permanent housing."

#90 new shelters
#homelessness crisis
#mayor de blasio
#original
Do you know the scoop? Comment below or Send us a Tip
A new Gothamist is coming! We’ve moved comments over to our beta site. Click here to join the conversation and get a preview of our new website.