Mayor Bill de Blasio, top NYPD brass and several community leaders gathered in Prospect Park Wednesday to announce the details of a plan to crack down on crime during the Crown Heights J'Ouvert celebration, a raucous all-night party set to begin at 2 a.m. Monday morning that will move through much of the neighborhood's Caribbean areas before finishing at 10 a.m. The Mayor repeatedly framed the plan as the product of a year-long working partnership between city officials, Crown Heights residents, and the NYPD—one that would ensure 2016 yields "the safest J'Ouvert ever."

NYPD Chief of Department (and soon to be Commissioner) James O'Neill reaffirmed the promise that, compared to 2015, twice as many officers will police this weekend's J'Ouvert as an estimated 250,000 people show up to revel in the streets. The heightened police presence will be felt not only along the parade's main route, but all throughout the surrounding streets. Amongst them will be counter-terrorism units and K-9 dog patrols; above them will be 42 newly-installed surveillance cameras and 200 light towers, up from 40 last year.

"Some fear the event because of the history of violence associated with it," O'Neill said.

"You're going to see light towers like you've never seen before," de Blasio assured. "This event happens overnight and one of the things we know makes people feel safe and helps police do their jobs is a well-lit environment." The Mayor described the planned NYPD presence as "massive" and said that unprecedented measures will be taken in order to prevent the kind of tragedy that befell last year's J'Ouvert, when party-goer and Cuomo administration lawyer Carey Gabay was fatally shot during a shootout during the festivities.

"The tragedy of losing Carey Gabay I think gripped the whole city, and added to everyone's resolve," de Blasio said. The Mayor recalled last summer's J'Ouvert shooting as a sorrowful way to come to know Gabay, but went on to praise his family for being involved in the enactment of new safety measures geared toward preventing violence while preserving the spirit of the celebration.

Indeed, de Blasio called on numerous members of the community including Mt. Zion Church of God 7th Day pastor Gil Monrose and J'Ouvert City International President Yvette Rennie, both of whom were involved in neighborhood outreach aimed at keeping guns and gangs out of J'Ouvert. Monrose spoke of going door-to-door with congregation members to visit with "known shooters and gang members" and make "sure that they get the message," while Rennie stressed violence has no place in the weekend of Caribbean tradition.

"We are very proud. But with that comes some serious responsibility," she said. 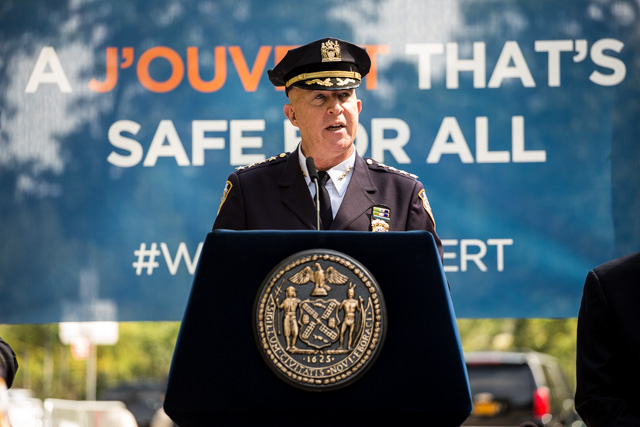 "The hardware is so important," de Blasio continued. "The cops, their equipment, their training, the light towers...But what also matters, deeply, is the involvement of the community in keeping the event safe. The vast, vast majority of community members want the event to be safe and are willing to do something about it and they have been part of this planning process."

"This is not just bringing police in in isolation."

Also new for 2016, organizers have secured a parade permit from the city for the first time in J'Ouvert history.

For decades Crown Heights has celebrated J'Ouvert, a neighborhood-wide block party during which dozens of Caribbean bands perform in a precessional that lasts for hours. Dancers, steel drummers, horn players, and partiers traditionally gather on Flatbush Avenue near the Northern corner of Prospect Park hours before the scheduled 4 a.m. start time, at which point they move south to Empire Boulevard, East to Nostrand Avenue, and then again south before finally stopping at Maple Street. Musicians compete for prize money, and at the parade's end judges declare an official winner. 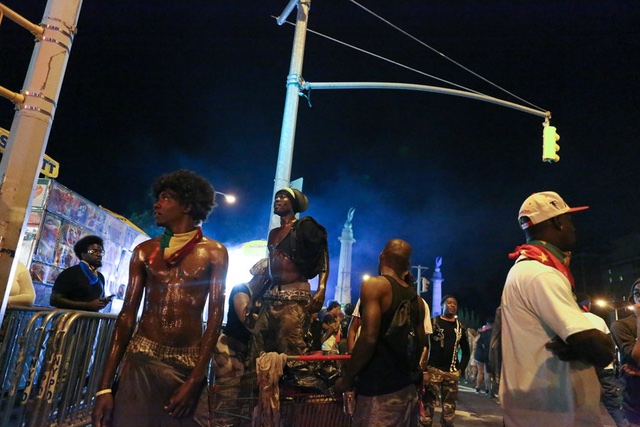 Changes to security measures during the West Indian American Carnival have been extensively publicized by the police and city government in the wake of Gabay's death. One such measure included the decision to rip up concrete pedestrian islands on Eastern Parkway after it was found that the trucks carrying parade floats would not be able to maneuver around them. The islands' demolition caused an uproar among some local residents, who accused the city of putting one day of convenience ahead of a year of safety.

When asked, de Blasio denied that parade organizers were behind the islands' removal. "Some of the elected officials raised the concern that there might be a danger problem because of the floats having to navigate in a very tight space," the Mayor said.

Commissioner Bill Bratton confirmed that several thousand officers—an "overwhelming police presence"—will be working to control crowds and prevent violence Sunday night, and that many more cops will be present during Monday's West Indian American Day parade, which is expected to attract over 1.5 million people. (Though a looming tropical storm may end up reducing attendance numbers.)

"The police are only part of this equation," O'Neill said. "Especially the night of J'Ouvert, it's an absolute shared responsibility between the NYPD and the public we are sworn to protect and serve."

"This is not just about bringing more cops to Brooklyn," the incoming Commissioner asserted. "It's got to be a shared responsibility here. It can't just be about the police, it's got to be everybody involved."