by Jake Offenhartz and Emma Whitford

In May of this year, long after the Department of Education announced an investigation into dozens of yeshivas for failing to provide a basic education to their students, Mayor Bill de Blasio effusively praised one of the yeshivas that was being investigated.

In a letter obtained by Gothamist, de Blasio congratulated Crown Heights yeshiva Oholei Torah for "giving its students the tools they need to build solid foundations for their futures," even as alumni accuse the ultra-Orthodox school of leaving them unprepared for college and a career.

Meanwhile, the Department of Education has yet to issue any findings related to their investigation of educational neglect at 39 yeshivas in New York, and has allegedly blown through several promised deadlines since the probe was opened over two years ago.

At a press conference outside City Hall on Wednesday, secular education advocates criticized de Blasio's support for the school, and accused the mayor and Schools Chancellor Carmen Fariña of dragging their feet on the investigation for fear of offending the powerful Hasidic and ultra-Orthodox voting blocs.

"The politics behind this is obvious—the city is absolutely terrified of calling out the Hasidic yeshivas, because the findings would indicate that they're not even close to meeting state requirements [concerning education]," Naftuli Moster, the executive director of Young Adults For A Fair Education [Yaffed], which acquired the mayor's letter, told Gothamist.

The letter was included in a commemorative "journal" distributed to guests at the yeshiva's 60th anniversary dinner this year, according to the group. It will be included in a forthcoming Yaffed report, which alleges that Oholei Torah provides no secular education to its students, in grades kindergarten through twelve. 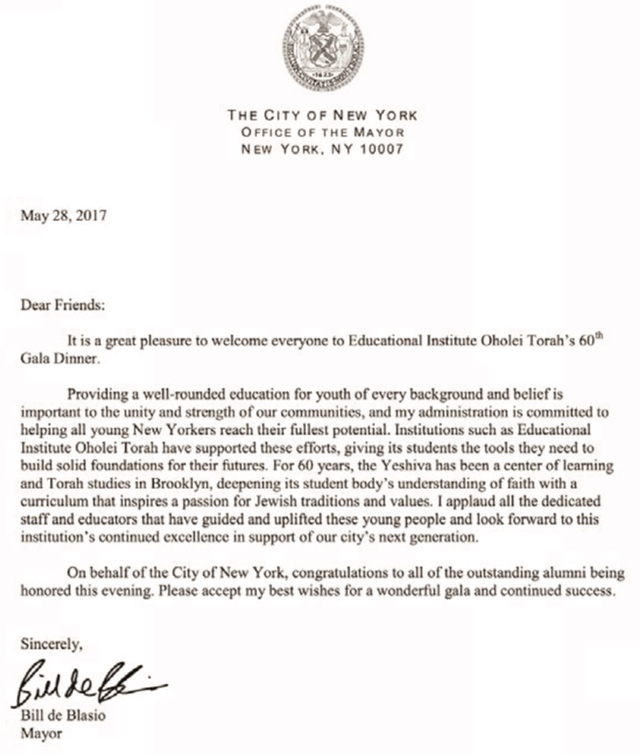 "It feels like the mayor just is not even pretending to care," said Chaim Levin, 28, who attended Oholei Torah in Crown Heights from 1995 to 2005. "It's like, he's rewarding very bad behavior. Bad behavior that's been going on for 60 years of this school's existence."

Oholei Torah did not immediately respond to a request for comment on the mayor's letter, or Yaffed's allegations. The Mayor's Office declined to comment on the letter.

In July of 2015, around 50 yeshiva parents, alumni and former teachers sent a letter to the DOE expressing their concern that the Orthodox schools were almost entirely focused on intensive religious studies, to the exclusion of math, English, science and social studies.

According to a report put out earlier this month by Yaffed, the lack of instruction in secular education leaves "young men lack[ing] the requisite skills to obtain employment with a decent income to support themselves and their (often large) families." The report recommends that the DOE establish a task force to improve education in the schools, and that all funding be cut to schools not meeting state benchmarks by summer 2019.

In response Yaffed's report, the pro-yeshiva group Parents for Educational and Religious Liberty in Schools [PEARLS] released a statement noting that the purpose of the ultra-Orthodox schools was for "children to receive a religious education that is central to their cultural identity, and that teaches young men and women to become thriving, respected members of the community." The group rejected Yaffed's recommendations.

"The vast majority of Hasidic boys' high schools do not teach any secular studies, zero, not even English," Moster said in response.

Such practices would place yeshivas in violation of a state law requiring all private schools to provide education that is "at least substantially equivalent" to that provided in public schools. While the city has promised a good faith investigation into the potential neglect, Moster says they've missed at least two deadlines that they set for themselves.

Toya Holness, a spokesperson for the DOE, told Gothamist, "The investigation is ongoing and we are treating this matter with utmost seriousness." She also provided Gothamist with a letter showing that the DOE had made scheduled visits to six yeshivas through the city, and planned to make additional visits throughout the month. She declined to answer a question about whether the department had a deadline for releasing their findings.

According to Moster, the DOE promised to release a report about the schools last summer, then pushed that back until this summer, and now appears to have backed off their commitment to a deadline entirely,

"If the only issue was waiting until after the elections, I would say fine," he noted. "The problem is what this delay symbolizes: the city will bend itself backwards to appease a handful of powerful Hasidic leaders. If the report does ever come out, I'm expecting them to water it down dramatically."

#department of education
#DOE
#mayor de blasio
#pearl
#yaffed
#yeshivas
#original
Do you know the scoop? Comment below or Send us a Tip