This latest line, which comes just a few weeks after the launch of the Bronx ferry, is the final of the six promised routes announced as part of last year's debut of city-subsidized ferries. Or at least, it's the final route for now. During this morning's inaugural ride, the mayor teased bringing additional service to other parts of the city in the near future. 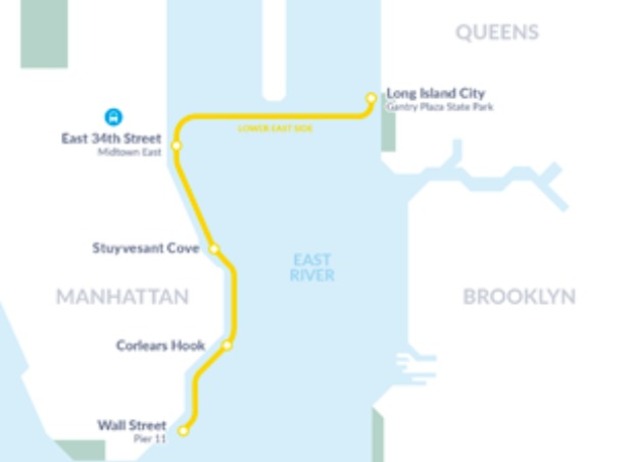 The new Lower East Side route

The mayor—a man who seems to loves expensive new boats as much as the governor loves expensive old cars—also touted the success of the ferries, which he says are "helping us build a fairer city for all."

Transit advocates, meanwhile, remain unconvinced. Much of their ferry-skepticism comes from the fact that the system has transported a grand total of six million riders thus far, or the equivalent of what the subways carry in a single weekday. The ferries also receive a $600 million subsidy from the city—which works out to $6.60 per rider, or about twice as much as what subway riders receive. While the city isn't disclosing much in the way of demographic data, an investigation into who is riding the ferries suggested that those benefitting from the generous subsidy are, by and large, higher-income New Yorkers and tourists.

Still, the mayor's pride in his ever-growing fleet of boats remains undeterred. "When we started, it was again just an idea," he said on Wednesday. "We had to go figure out if it would work. What we found is it worked better than anyone imagined and people like it more than we even knew."

#bill de blasio
#ferries
#ferry
#mass transit
#nyc ferry
#we the commuters
Do you know the scoop? Comment below or Send us a Tip