On a cold, clear morning in New York City, Harry Belafonte spoke frankly and with conviction about inequality, racism, and unfair policing. “New York alarmingly plays a tragic role in the fact that our nation has the largest prison population in the world,” the 86-year-old Belafonte, a civil rights icon and funder of the Freedom Riders, told hundreds of shivering listeners.

The sounds of an NYPD helicopter overhead ricocheted through the downtown park. “Much of that problem stems from issues of race, perpetuated by the depth of human indifference to poverty,” Belafonte continued, in a radical and strong salutatory. To whom was Belafonte speaking on this January morning? An ACLU rally? An OWS march? A foreign television network? None of the above. In a strange electoral twist, Belafonte was speaking before a past president, two possible future ones, the billionaire mayor he was publicly denouncing, and the incoming one, who, with the choice of Belafonte as a speaker, has signaled his commitment to progressivism in New York City, a predominantly liberal metropolis that has spent some two decades under conservative rule at City Hall.

Bill de Blasio’s inauguration yesterday was less a civic formality, and more of a vicious repudiation of the Bloomberg legacy, one which the former mayor had worked so hard to solidify in his final days.

"The fabric of our city, of our nation is made strong by the untold sacrifices of so many who are left defenseless, unrepresented, unspoken for,” Public Advocate Letitia James told the crowd after being sworn-in. “But at some point in history, the tide must turn, the policies that make them voiceless must give way to a government that works for them, that speaks for them, that cares more about a child going hungry than a new stadium or a new tax credit for a luxury development."

Swings at the Bloomberg administration came fast and furious—a whole hour had elapsed in the ceremony before Bill Clinton finally stepped in to thank the former mayor for his work over the past twelve years. 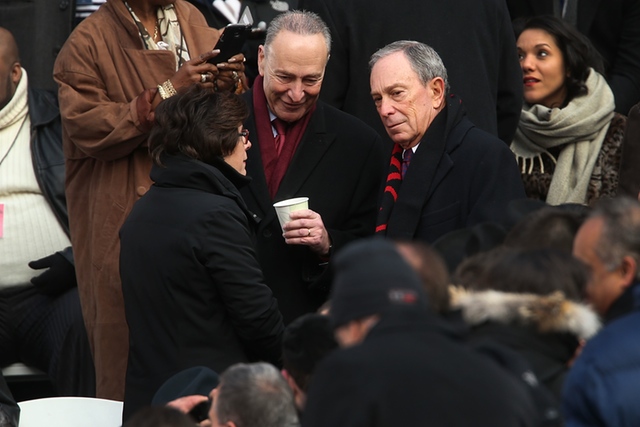 This was not a friendly audience for Bloomberg; in contrast to the rather somber and quick ceremonies that marked the beginning of Bloomberg’s second and third terms, City Hall Park was filled with a who’s who of New York City liberals, a group that finally coalesced around a single candidate and propelled him to a landslide victory. A DJ played Daft Punk and Jay-Z while celebrities like Steve Buscemi sat beside the labor groups and community organizations that now believe themselves to finally have the ear of City Hall.

“I’ve waited so damn long for this," David Pecoraro, a math teacher from Queens told me moments before the inauguration. “City Hall has been occupied territory for 20 years.”

After Belafonte spoke, Scott Stringer was sworn-in as Comptroller, again harping on a progressive vision for New York City while failing to mention his immediate predecessor (ironically, the arguably more progressive John Liu). “I believe that pursuing a progressive agenda and being fiscally responsible is not mutually exclusive,” Stringer said. “We can and must do both.”

Seated just feet away from Stringer was the Coates family, the subject of a long investigative report on homelessness by the New York Times. Dasani, the young homeless girl whom the story centered on, held the bible as James was sworn in as public advocate. James referred to Dasani as “her BFF,” and told the crowd that she, as public advocate, will work on behalf of families like Dasani’s, which have had to bear the brunt of the quickly calcifying inequality in New York City.

The stagecraft of Dasani’s appearance might give a cynic cause to wonder how much of this progressive cheerleading is really just hot air, destined to dissipate against the harsh realities of the city's financial sector, its economy, labor negotiations, and Albany. But with Stringer, James, and the City Council able to pursue a relatively radical agenda, de Blasio can position himself as a moderate voice, giving the appearance of making concessions to the center while playing a game of fake negotiation with his coalition on the left. 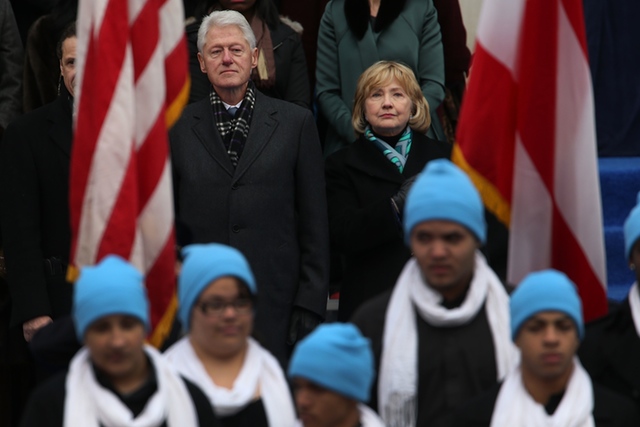 After a rousing (and again, Bloomberg-bashing) poem by teenager Ramya Ramana, President Bill Clinton took the stage to swear-in his former employee. Announcing that he agreed with de Blasio’s “core message” (probably not the tax increases), Clinton spoke at length (as is his wont) about the chilling effects of inequality: "This inequality problem bedevils the entire country. But it is not just a moral outrage,” Clinton said. “It is a horrible constraint on economic growth and on giving people the security they need to tackle problems like climate change."

Finally, almost ninety minutes into the program, Bill de Blasio was inaugurated as the 109th mayor of New York City on the bible of Franklin Delano Roosevelt. While the day was younger and sunnier, I had spoken with Desmond Emanuel, 66, a retired businessman from Harlem who expressed some fear that de Blasio will shift away from his campaign rhetoric. “I just hope we won’t see two Bill de Blasios," he told me. "I want the one that took some great positions during the campaign, and not the other who, under pressure, might now have to change to maintain the status quo." The status quo would possibly include the appointment of former NYPD commissioner Bill Bratton, as well as the hiring of a Goldman Sachs executive to a crucial position in the administration.

In his inaugural speech, de Blasio seemed incredibly cognizant of the criticism of his more conservative appointments. “Let me be clear,” de Blasio said under the graying skies. “When I said we would take dead aim at the Tale of Two Cities, I meant it. And we will do it… And we will give life to the hope of so many in our city. We will succeed as One City."

De Blasio then laid out his agenda for the next few months, which includes expansion of the Paid Sick Leave law, more affordable housing, universal Pre-K, as well as reforming stop-and-frisk. Each goal seems eminently achievable. They won’t stop the widening inequality and rampant unaffordability of the city, but will rather work as tests in how far the administration could reach, and who will push back once the city begins not working solely on behalf of its wealthiest citizens. 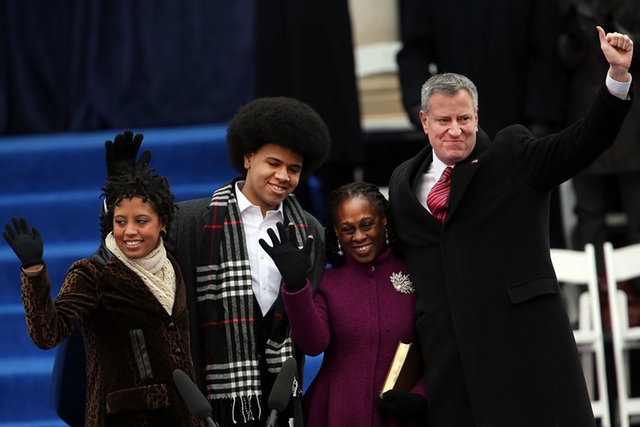 “Asking those at the top to help our kids get on the right path and stay there, that’s our mission,” de Blasio told the crowd. “And on that, we will not wait. We will do it now.”

If the new New York does indeed begin in the first few months of 2013, the de Blasio administration appears willing to strike a confrontational stance with the city’s elite, beginning with the man they are replacing, Michael Bloomberg. The billionaire sat sullenly on the stage while being lambasted by speaker after speaker, softly offering one or two claps for every speech. After the end of the inauguration, as attendees went off to eat food from each of the city’s five boroughs in a reception on Chambers Street, Bloomberg quickly descended through City Hall.

I had followed a few staffers into the building and stood beside the last door Bloomberg might ever walk through in City Hall. Quickly, with just a few security guards and his girlfriend, Michael Bloomberg exited the building and walked without stopping to his SUV, where it took off to return him to uptown. Above me, New Yorkers were lining up to wait hours for the opportunity to shake the new mayor’s hand.