NYPD Commissioner Bill Bratton has vowed to avoid mass arrests of the Black Lives Matter protesters who have been shutting down bridges and snarling traffic. “We are still paying out from the 2004 Republican National Convention and the Wall Street— Occupy Wall Street—to date, about $18 million," Bratton said recently. “When you lock up five or six hundred people all at the same time, you don’t have what the courts require to successfully prosecute." Yet the de Blasio administration continues to fight in federal court for the right to arrest hundreds of protesters without warning.

"Mayor de Blasio, even though he says that he supports peaceful protest with those rulings that held the police in check, now he's trying to unravel them," says Carl Messineo, the legal director for the Partnership for Civil Justice Fund.

"Now he wants the court to issue a ruling that says you don't need to give fair warning. You don't need to give notice and opportunity to comply with police directives before those hundreds of persons can be arrested. So in fact, what lies in jeopardy is the status quo that we've been seeing in the streets, which has been restrained by the part of the police in terms of not engaging in these mass false arrests that were characteristic of the prior administration."

After the NYPD arrested around 700 Occupy Wall Street protesters on the Brooklyn Bridge in 2011, the protesters sued, claiming that the police led them onto the bridge and arrested them without adequate warning, and that the police should stand trial. 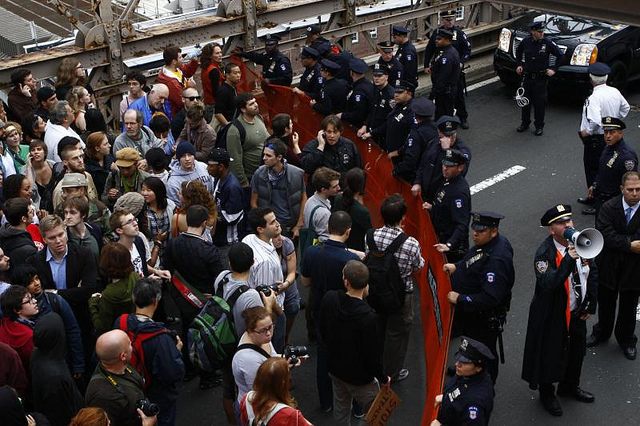 Federal Judge Jed Rakoff agreed, writing in his opinion that “A reasonable officer in the noisy environment defendants occupied would have known that a single bull horn could not reasonably communicate a message to 700 demonstrators." He added that the NYPD officers who walked in front of the protesters on the Brooklyn Bridge that day gave the demonstrators “an implicit invitation to follow.”

A federal appellate court judge agreed with Judge Rakoff that the case should be heard.

But yesterday, the 2nd Circuit Court of Appeals granted the City's request for the case to be heard at an en banc hearing before all 22 judges who sit on the Second Circuit, effectively throwing up another roadblock to prevent the case from going to trial.

The date for the en banc hearing will be set in the coming weeks. A Law Department spokesperson said, "We are pleased that the full court has decided to hear the case."

Representatives from City Hall have not yet responded to our request for comment.

Messineo, whose group is representing the protesters, said the City's position "essentially criminalizes any approach to protest," and that de Blasio should drop its appeal and negotiate a settlement, as he did with the federal stop and frisk ruling.

"It's time for de Blasio to bring his policy, procedure, and training under the NYPD in line with what his rhetoric is."