Mayor Bill de Blasio told reporters on Wednesday that he believed the NYPD sergeant who shot and killed Bronx woman Deborah Danner inside her apartment on Tuesday night committed a clear breach of protocol. Danner, who had a documented history of mental illness, allegedly approached NYPD Sergeant Hugh Barry brandishing a baseball bat before he shot her twice, fatally, in the stomach.

Barry had a Taser, but fired his service weapon instead. Barry also declined to wait for an Emergency Service Unit (ESU) trained to assess emotionally disturbed persons (EDPs), according to the mayor.

"It should never have happened, simple as that. The NYPD's job is to protect life," de Blasio said, adding, "Deborah Danner should be alive right now, period."

The mayor went on to recount a recent conversation with Jennifer Danner, Deborah's sister, who he said was standing in the hallway outside Deborah's apartment when the fatal shots were fired. Jennifer "was ready to go with the police and with her sister to the hospital and try to address challenges that her sister faced," he said. "She had spent decades trying to help her sister, since college."

"That's not how it's supposed to go. That's not how we train," O'Neill said, adding, "My commitment as police commissioner is to find out what went wrong and why. What is clear in this one instance—we failed."

According to an initial NYPD report, officers responded to a 911 call about an emotionally disturbed person at 630 Pugsley Avenue around 6:06 p.m. on Tuesday and were directed to the 7th floor. A few minutes later Sergeant Barry entered the apartment and encountered Danner in the bedroom, holding a pair of scissors. Police said that he "persuaded" Danner to put down the scissors. She then allegedly picked up a baseball bat and "attempted to strike" the officer. He then fired two shots at her torso.

Mayor de Blasio could not confirm Tuesday at what point a specially-trained ESU team arrived at the scene, but both he and O'Neill said that Sergeant Barry was in a position to use discretion. "From everything we know so far there was time to wait for ESU. There was an opportunity to slow things down here," de Blasio said.

In the aftermath of the shooting, elected officials and advocates have voiced anger and confusion, drawing comparisons to the murder of Eleanor Bumpurs, an emotionally disturbed 66-year-old black woman who threatened officers with a knife inside her NYC apartment in 1984 just before a cop shot her with a 12-gauge shotgun. An emergency protest has been planned for 7:00 p.m. tonight near Danner's apartment.

"How do we get from a 911 call, reportedly about someone acting in an irrational manner, to the use of lethal force against a 66-year-old woman?" wondered Senator Jesse Hamilton in a statement. 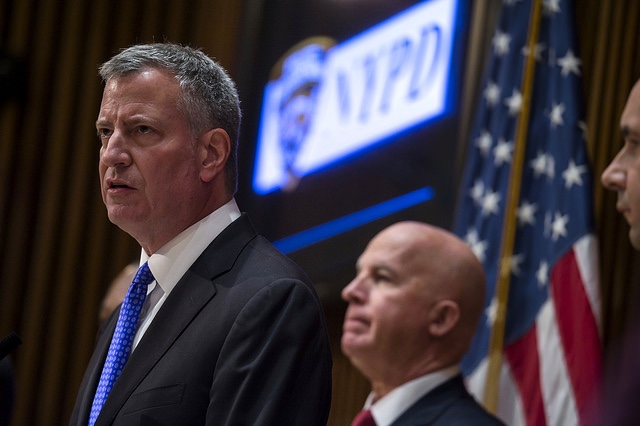 But Mayor de Blasio said repeatedly on Wednesday that he believed Sergeant Barry was an outlier. "This is a very particular [situation] and not a systemic reality," he said, adding that 5,000 police officers have received new EDP training since it was introduced last summer, and more are scheduled to. According to WNYC, the NYPD has committed to train about 10,000 officers, or about one third of the force, to respond to EDPs.

Barry has not received the training, according to the mayor, though he has been trained in deescalation tactics. Regardless, de Blasio insisted, civilians should keep calling the police in instances of emotional distress. "Do not hesitate," he said. "Because so many times our officers save lives."

Communities United for Police Reform spokesperson Monifa Bandele challenged in a statement that Danner's killing "should raise serious questions about why police are first responders in apparent incidents of emotional or mental health distress."

Danner is one of several people deemed emotionally disturbed who have been killed by police in recent years. In July, police shot an "emotionally disturbed" man who was allegedly brandishing a gun at the Cooper Park Houses in East Williamsburg. And 29-year-old Anthony Paul II died of cardiac arrest after being Tasered by police last summer.

"It remains puzzling why the mayor seems to be claiming this [Danner case] is an anomaly, disregarding the lives of other New Yorkers taken in similar circumstances during his tenure," Bandele said.

The NY Post reports that Sergeant Barry has been sued twice for police brutality in the last four years. In a 2012 federal lawsuit, a man named Gregory Peters accused Barry and ten other officers of spraying him with pepper spray and punching and kicking him during a 2010 confrontation in Times Square. The city ultimately settled with Peters. 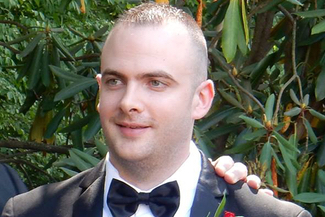 In a 2014 case, a man named Gabriel Diaz accused Barry of beating him and two other Latino men outside of a hip-hop concert at Tammany Hall on the Lower East Side in 2011. According to the suit, Barry was among 20 involved officers. Sources told the tabloid that Diaz required several staples at the hospital, and arrived at his hearing in a neck brace. The charges against Barry were dismissed in court.

Sergeant Barry has been placed on modified duty pending the completion of an internal investigation into Danner's death, and Mayor de Blasio said Tuesday that he had not been briefed on Barry's disciplinary history (the NYPD did not immediately respond to a request for comment).