De Blasio: Civil Disobedience Means Do What The Cops Tell You

After police refused to let thousands of peaceful Black Lives Matter protesters march in the street on Wednesday, some people noted that the NYPD's tactic of violently repelling and arresting demonstrators differed considerably from how the de Blasio administration handled similar protests just a few months ago. At a press conference yesterday, the mayor assured reporters that this was wrong: "If you guys want to sensationalize, if you think that's your contribution to society, feel free."

"I'm giving you lots of quotes, maybe you could borrow from some of these quotes," the mayor said, helpfully, as he set the record straight.

"We have an extraordinary tradition of freedom of thought, a respect for diversity of all kinds, and a deep, deep respect for the right to peacefully protest. It's something that I believe that the NYPD has handled, over many, many years, with exceptional distinction."

Overwhelmed by rich memories of the NYPD's harmonious handling of dissent, the mayor seemed to have forgotten all the rebukes the department has earned from federal courts for unlawfully spying on innocent people, the wrongful arrests of nearly 2,000 political demonstrators (and subsequent $18 million settlement), and the wanton acts of cruelty committed against some people riding bicycles.

The mayor continued: "The NYPD coordinates with any protesters who want to have an honest conversation about how to make their protests work right. There's is a long tradition of this. Ask people the stories of Occupy Wall Street, of the ongoing dialogue that occurred between police and the protesters, day in and day out."

The NYPD's restraint during Occupy Wall Street was so exemplary that it has cost taxpayers millions of dollars.

So where did Wednesday's Freddie Gray solidarity marchers go wrong? Why were they forcefully arrested and dispersed, and not allowed to march peacefully in the street?

"I think the reality is, it's rush hour, it's a busy intersection, the police logically say, 'Okay, we want people to stay in the sidewalk in this instance'…and people have to respect that. If 20,000 people show up, you're probably not gonna say, 'Could you all stay on the sidewalk,' right? You're gonna say, 'OK, we're gonna find a way to accommodate you on the roadway we want this to be done the right way in a nonviolent fashion.'"

Photographic evidence illustrates the ease with which Wednesday's middling crowd could have walked single file down any New York City sidewalk without making a significant disruption. 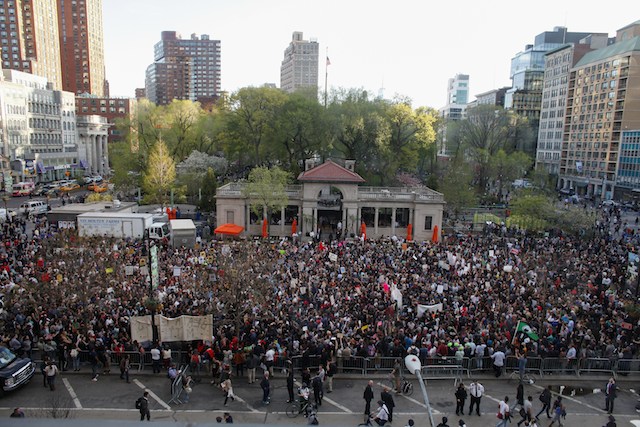 De Blasio was asked if he had gone against his advice to "follow instruction" from the police with his own arrest in 2013, when he was running for mayor.

The mayor called his arrest in 2013 "the most choreographed thing on earth in terms of how the police wanted to handle it. We didn't make it up. We said, 'We're protesting the closure of a hospital, this is our intention, people will get arrested because they're protesting.'"

(Gandhi, King, et cetera, famously changed the world with their unquestioning servility to law enforcement—see King's "Letter From A Birmingham Jail That I Had The Cops Proofread.")

In short: if you want to disobey the police, you have to make an appointment. It also helps if you're a prominent, white, male, elected official running for higher office. Challenging the status quo sometimes means being a part of it.

To the protesters who turned out on Wednesday to protest police brutality, whose friends and relatives were killed by the police, or whose skin color alone equates them with criminality in the eyes of the law, the mayor gave very clear advice: "Pay attention to the instructions of the police, and I think everything will go fine."

black lives matter
civil disobedience
It's okay when I do it when I'm running for office when it's a sham you know?
original
Christopher Robbins