Mayor de Blasio has made a formal plea to the state legislature to amend Section 50-a of the New York State Civil Rights Law, which the NYPD has used to justify withholding disciplinary records of police officers who have been accused of misconduct. "Without significant changes to this statute, the city remains barred from providing New Yorkers with the transparency we deserve," the mayor said in a statement.

The section of law states that personnel records of police officers, correction officers, and firefighters "shall be considered confidential and not subject to inspection or review," except as mandated by court order. Robert Freeman, director of the State Committee on Open Government, puts it another way.

Under the law, "those public employees who have the most power over people's lives are the least accountable," he told us. "And to my mind, that's backwards."

Though 50-a has been on the books since 1976, the NYPD for decades provided reporters with information on promotions and transfers, along with brief discipline summaries. Then, last month, outgoing NYPD Commissioner Bill Bratton told reporters that he'd learned the practice was in violation of 50-a, and put a stop to the practice.

The legislation was initially enacted to make it harder for defense attorneys to challenge the integrity of officers in court, by forcing lawyers to get a judge's order to acquire the records.

The city has also twice appealed court rulings that the disciplinary record of Officer Daniel Pantaleo, one of the officers who killed Eric Garner, is not protected under Section 50-a. DNAinfo reporter Murray Weiss believes that his April reporting on a departmental guilty finding against Pantaleo for an improper frisk in a separate case prompted the NYPD's sudden decision to start withholding records. 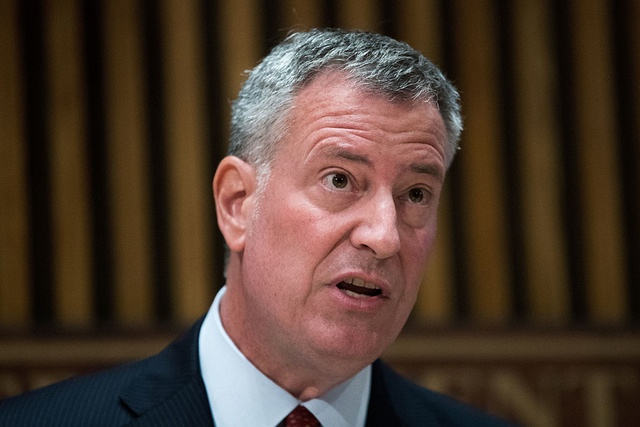 Some city lawmakers are also angry at the department and de Blasio for the surprise decision and their stubborn sticking on it.

"If the mayor—who was elected on a platform of police reform—wanted to disclose NYPD discipline records, then why on earth would he challenge a court decision affirming that very preference?" asked City Council members Ritchie Torres, Antonio Reynoso, and Carlso Menchaca in a September op-ed. They added:

By abandoning an interpretation of state law stretching back four decades, through multiple mayoral administrations, both Democrat and Republican, the NYPD is robbing Gwen Carr, Eric Garner's mother, of the most basic right to know whether the officer who brutally killed her son would even be placed on modified duty, much less held accountable for the unjustified taking of a life.... A city agency that willfully discards a 40-year tradition of disclosing disciplinary decisions is demonstrating that it cannot be trusted to govern fairly when playing by its own rules.

Mayor de Blasio alluded to his interest in having 50-a repealed in September, on Brian Lehrer's "Ask the Mayor" segment. "I believe we should change the state law and make these records public,” he said. "The current state law that we have to honor—that does not allow for transparency."

In today's announcement, the Mayor's Office reiterated that "just like every administration that has preceded it, [we are] constrained to follow state law," but pledged to "seek amendments to Civil Rights Law Section 50-a in the upcoming 2017 state legislative session."

Ideally, the announcement said, the NYPD would be legally obligated to post on its website an officer's name, the charges against that officer, the transcript of the officer's departmental hearing, summary of the judge's decision, and the NYPD commissioner's final disciplinary decision.

Freeman, the public-records watchdog, said he believes the mayor is now "doing the most he can do" to increase NYPD transparency on discipline measures, considering the constraints of the law.

"For the past several years the COOG has called either for significant amendment or repeal of 50-a," he added. "For years there were only a couple members of the legislature expressing interest. A bandwagon has developed, and the mayor has jumped on it. The floodgates, it seems, have opened."

A spokeswoman for Communities United for Police Reform, one of the advocacy groups pushing for the release of Pantaleo's disciplinary record, was less convinced.

The city has "created the appearance of identifying a solution to a problem that they partially created," said spokeswoman Monifa Bandele. "None of this addresses the fact that they continue to fight a state court ruling that denied the application of 50-a in justifying their continued concealment of Officer Pantaleo's substantiated CCRB complaints summary."

The City Law Office did not immediately respond to a request for comment, but spokesman Nick Paolucci said last month of the Pantaleo appeals, "The lower courts have issued varying decisions and we seek clarity. More arguments and views before the court will provide the court with a more thorough view of the interests at stake."

Either you believe in abiding by the law or you don't, and 50-a, in its current, flawed form, legally prohibits the disclosure of discipline records. We're fighting to change this statute. We urge all advocates in favor of greater, lawful transparency to join us in that fight. The reforms that we have proposed go farther in opening disciplinary records to public scrutiny than ongoing litigation could achieve.

#50-a
#city law department
#disciplinary records
#eric garner
#mayor de blasio
Do you know the scoop? Comment below or Send us a Tip