Mayor de Blasio and various city officials and public advocates announced some major progress in the mayor's plan to create more affordable housing. The City has financed the creation and preservation of more than 17,300 affordable housing units in the 2014 calendar year—which they proudly announced were enough units to house nearly 42,000 New Yorkers.

"New York City has to be a city for all. That's our history, and our destiny," de Blasio said at a press conference in Fort Greene today. He spoke about the ambitions of his 10 year housing plan: "No city or state has attempted to build over 200,000 units of housing in just ten years. It's unprecedented, but it's necessary." (Read more about it here and here)

Many politicians, including Letitia James, Brooklyn BP Eric Adams, and Congressman José E. Serrano all praised de Blasio for "keeping his word" in making affordable housing one of the major cornerstones of the first year of his administration.

Given that at least 11,000 affordable housing units disappear each year, some might argue that the City should be fighting harder to stop rent regulation laws from expiring, which de Blasio is ill-prepared to do after November's election, which kept the State Senate firmly in Republican control.

Today's press conference was held at 45 North Elliott Place, a low-income cooperative home to 159 families earning less than $60K a year (for a family of four). The City has invested $3.1 million in capital funding, plus $250K from James from her time as a Council Member, to ensure the building will remain affordable for another 30 years. 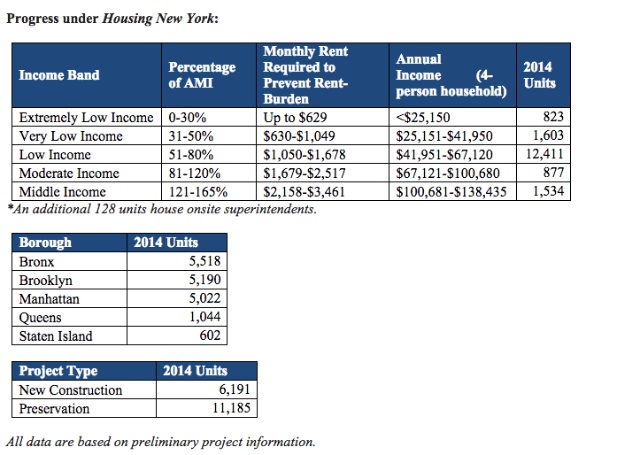 Housing Commissioner Vicki Been further explained the process by which the City chooses and then rehabilitates already existing units like the co-op at North Elliott Place:

We really do two different things: one is that we provide money so that the costs of maintaining the building are affordable to the lower moderate income people who live here. If we didn't do that, they'd have to raise maintenance, it'd become unaffordable, they might sell, and they might sell to people with much higher incomes. We also always enter into a regulatory agreement which requires that if any of the currently lower to moderate income owners were to sell, they must sell to a similar lower to moderate income person, so that keeps the project affordable over the long term.

#affordable housing
#bill de blasio
#mayor de blasio
#original
Do you know the scoop? Comment below or Send us a Tip