Mayor de Blasio surfaced in Bowne Playground in Flushing, Queens this morning to unveil his Community Parks Initiative, a $130 million plan to rehabilitate, repair, and, in some cases, rebuild dilapidated parks in some of New York City's poorest neighborhoods. The initiative will use public funds to fully rebuild 35 public parks in places like Brownsville, Brooklyn, Manhattan's Lower East Side, and Mott Haven in the Bronx.

Those 35 parks targeted by the Community Parks Initiative (CPI) total 65.5 acres of public green space and were specifically chosen based on their densely populated, lower income surroundings. Parks which have fallen into disrepair in areas with higher than average poverty rates were specifically targeted for new funding. De Blasio also announced a plan to fund new painting and planting projects in 55 other complementary park sites.

“From children and parents to athletes and students, every New Yorker deserves access to clean and safe public parkland—no matter what neighborhood they live in," de Blasio said in his remarks. "The Community Parks Initiative reaffirms our administration’s commitment to the creation and maintenance of vibrant parks and public spaces in all five boroughs.” In addition to large-scale "full recreation" of parks' grounds and fixtures, the investment will pay for new gardening, maintenance workers, and local community programs at the 35 sites. 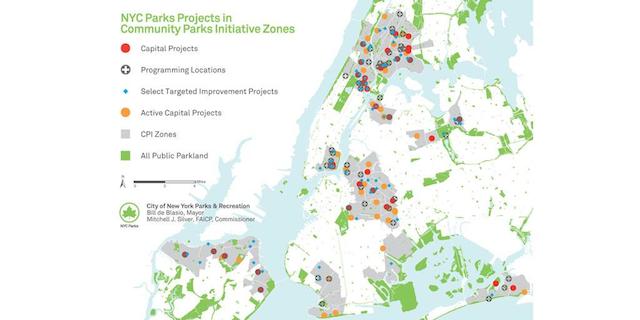 The fact that the CPI's $130 million capital investment draws from public funds is a point of contention; many, including state Senator Daniel Squadron, had hoped that the flush, privately-funded park conservancies would cover some or all of the payout to smaller parks. Last year Squadron sponsored a bill that would require conservancies to join local parks alliances and chip in for small, battered green spaces. De Blasio, the Times notes, has stopped short of endorsing the bill.

Nevertheless, City Council Member and Parks Committee Chair Mark Levine praised the initiative for its focus on the city's not-so-famous parks. "For years, a small number of New York City's marquee parks have prospered, while hundred of neighborhood green spaces languish under a stagnant Parks Department budget," Levine said earlier today. "Nowhere is this disparity more glaring than in the city's low-income neighborhoods."

Approximately 220,000 New Yorkers live within 10 minutes' walk of the public parks targeted by the initiative. The full list of green spaces set for reinvestment is below.

#bill de blasio
#conservancies
#CPI
#parks
#parks department
Do you know the scoop? Comment below or Send us a Tip