Late Wednesday night, days before the four year anniversary of Hurricane Sandy, members of the City Council received Mayor de Blasio's formal admission that his office will not finish construction on hurricane-damaged homes in the Build It Back program by the end of 2016, as promised.

"We will fall short of that goal, for which my team and I take personal responsibility," de Blasio wrote in the introduction to his October Build It Back Progress Update, which is now public [PDF].

Instead, the mayor said, 75 percent of the 4,016 single-family homes that the city is rebuilding from the ground up are on track for completion by year's end. Widen the pool to include all homes in the program, and more than 3,000 of the total 5,565 are incomplete as of this month—about 56 percent of them.

Build it Back leaders detailed snags the project has hit since its June 2013 inception. For one, the sandy terrain underneath many damaged buildings proved difficult to build on. "The original model assumed that over 90% of these houses could be lifted and set back down," said Build It Back Director Amy Peterson. "Certainly what we found with the architects, is that this is not what it takes." John Grathwol, budget director for the Office of Management and Budget, added that, in the midst of a construction boom, the program has "struggled to get enough architects."

The shortcomings of Build it Back, which was formed during the Bloomberg administration to help families either elevate their homes above flood level, permanently relocate, or demolish and rebuild completely, have been widely reported. By February 2014, more than a year after the storm, no houses had been built in the program. By that July, 30 had. In June, a Build It Back house in Gerritsen Beach collapsed dramatically and, it could be said, metaphorically. The process of acquiring allocated federal funds has proven lengthy and complicated.

But the City Council's Committee on Recovery and Resiliency said during a Thursday hearing that this latest update speaks to City Hall's communication failures. The Committee is tasked with monitoring the progress and cost of storm-recovery efforts, but says the city has kept them in the dark about major holdups twice in under two months. In late September, the Wall Street Journal reported that Build it Back is $500 million over budget and will make up the difference using city taxpayer, rather than federal, money—news that came as a surprise to the Council and dominated last month's oversight hearing. Now, this status update.

"It feels a little like groundhog day," added Council Member Steven Matteo, who has many constituents in the program. Matteo added that he is worried that other capital projects might suffer as a result of the $500 million reallocation to a program that's not keeping its promises. "I'm very uncomfortable with all of the money moving around," he said. "I feel like you're asking us to make a leap of faith that we're not going to have a huge budget hole in the coming years."

"We failed you and failed ourselves in [not] bringing our case to you in advance of our hearing," said Grathwal, of the budget shortcoming. "We'll do better." 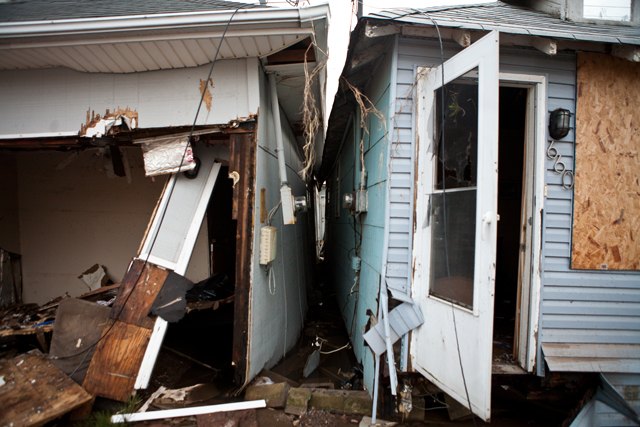 Treyger said the latest news is especially upsetting in light of the fact that Build It Back was initially budgeted to serve 22,000 applicants, and is now serving only 8,585.

"The amount of $1.7 billion was initially estimated for a pool of 22,000 [households]," he said. "Now there's been a shifting of hundreds of millions in city capital, which takes us to $2.2 billion. That's $2.2 billion to serve a total of 8,500 applicants. So clearly we are spending more than originally anticipated and only helping and assisting under half of the original applicant pool."

Peterson said that her team has instated measures to help families that are considering exiting the program, like rental assistance during construction and help navigating the brutal rental market to find a temporary home. As for why so many people have left the program, she said the city had hired researchers from the City University of New York to "do some outreach to understand that better."

In order to speed things up in the coming months, Peterson added that Build It Back is increasing incentives for homeowners to sell their damaged homes to New York State, rather than rebuild them. The maximum acquisition incentive is now $150,000, on top of the purchase price of the home pre-storm.

But council members said on Thursday that the city should have done a better job of advertising the acquisition option, sooner: Why march forward with reconstruction efforts that have proven costly and challenging, when some homeowners might be better served with a check to ease their relocation further inland? If, as Treyger put it, "someone's home is literally right by the ocean, where there are still risks posed to them."

Grathwol said that Build It Back is committed to giving residents the choice to stay in their communities. "If someone decides to get elevated and rehabbed, we are for that," he said.

In the middle of Thursday's hearing, Council Member Matteo asked bluntly when the remaining 25 percent of the Sandy-damaged single-family homes will be complete.

"We're committed to come out and see the interest in acquisition," Peterson deflected. Pressed later for a more direct answer she said, "We will come and let you know in November what the timeline is."

#Build It Back
#City Council
#hurricane sandy
#Promises
#original
Do you know the scoop? Comment below or Send us a Tip