Overnight, four new Times Square free speech cages "designated activity zones" were brought to life and painted "Techno Teal," as part of the de Blasio administration's push to corral Times Square costumed characters—as well as tour bus ticket sellers, people who want to know if you like comedy, and others. Manhattan Borough President Gale Brewer said in a statement, "The conversion of Times Square into a pedestrian plaza has made it a truly amazing, special place—but it has needed ground rules."

Those "ground rules" were passed by the City Council in April, worrying the dozens of people who dress as Minions, Hello Kitty, superheroes and villains, and Disney characters and make money off tips from tourists. Lawmakers and business leaders point out that some of those characters have been arrested for allegedly assaulting or intimidated tourists who don't realize they should give a courtesy tip.

Department of Transportation Deputy Borough Commissioner Edward Pincar explained the DOT will deploy "Street Ambassadors" to explain the new designated activity zones—"the DAZ's"—to the characters and other vendors in both English and Spanish. "The blitz will be next week, with tables" and postcards in different places, he said. Then, on June 21st, the NYPD will start enforcement of the zone. 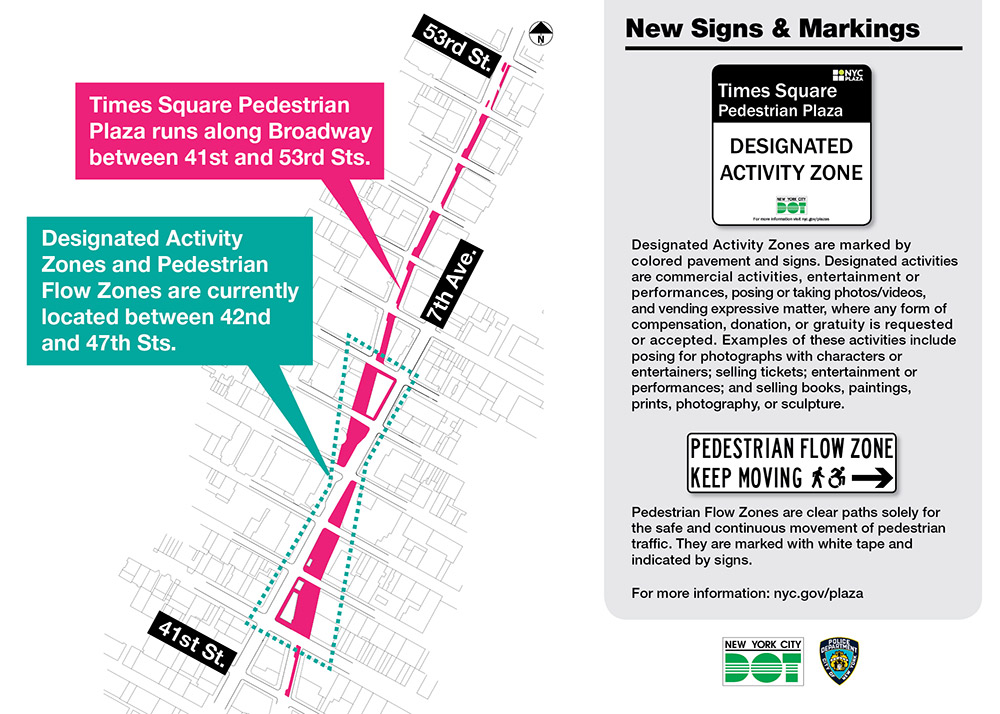 NYPD Times Square Commanding Officer Captain Robert O’Hare outlined the department's strategy: If an entertainer or vendor is outside the DAZ, then he/she could be issued a non-criminal summons for disobeying the administrative code; if it happens again, then it may become a criminal issue. O'Hare implied it would be a wait-and-see situation, because "we're expecting voluntary compliance" from the characters.

The officials called it a "step in the right direction." Times Square Alliance Executive Director Tim Tompkins, whose group works to promote the area and works with local businesses (from Broadway theaters to the huge stores), said that there would be a "check-in" with the entertainers "after a few months" to see how the DAZ's were working and if it was negatively affecting their ability to make money. "This is a new system," Tompkins pointed out, and suggested the plans could evolve, but ultimately it would be up to the city. 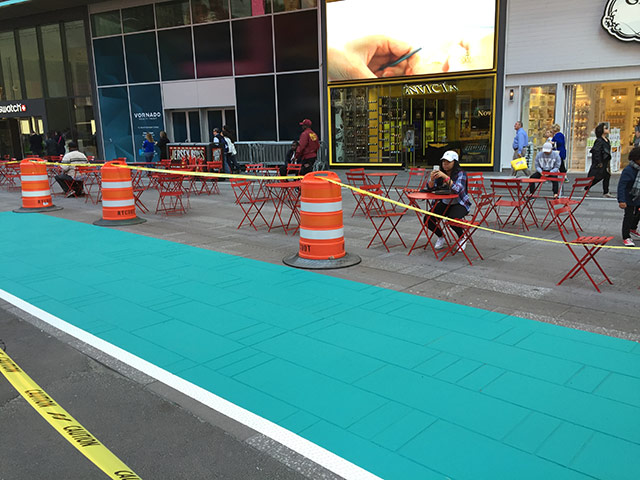 Captain O'Hare wouldn't confirm whether the promised 100 additional officers would be there. After the press conference, when a reporter asked him if a desnuda could walk outside the DAZ if she wasn't asking for money, O'Hare nodded.

Overall, there will be eight DAZ's along the pedestrian plazas between 42nd and 47th Streets in Times Square. There are also designated "chill zones" with seating as well as "express lanes" for pedestrians to walk in. Note: Only the DAZ's are painted; the chill zones will supposedly have signs while the express lanes will be noted by white stripes.

A few of the costumed characters we spoke to refused to comment on the new rules. We did observe a father being hassled by an Ana from Frozen, Minnie Mouse and a Minion for not tipping and then not tipping enough. The tourist, who was visiting from Alabama with his wife, twin five-year-old girls and two eight-year-old nieces, and he said that the characters approached the children first: "[The kids] see their favorite characters, and what am I supposed to do?" He said he had no idea he was supposed to tip them but the Minion "sure let me know." He ended up giving two dollars before hustling his family to Chik-fil-A.

When the City Council first considered these changes last year, civil rights attorney Norman Siegel said, "I can't imagine this plan wouldn't be challenged in the court. Whether I do it or not, someone's going to do it."

#Costumed Characters
#designated activity zone
#Times Square
#original
Do you know the scoop? Comment below or Send us a Tip
A new Gothamist is coming! We’ve moved comments over to our beta site. Click here to join the conversation and get a preview of our new website.