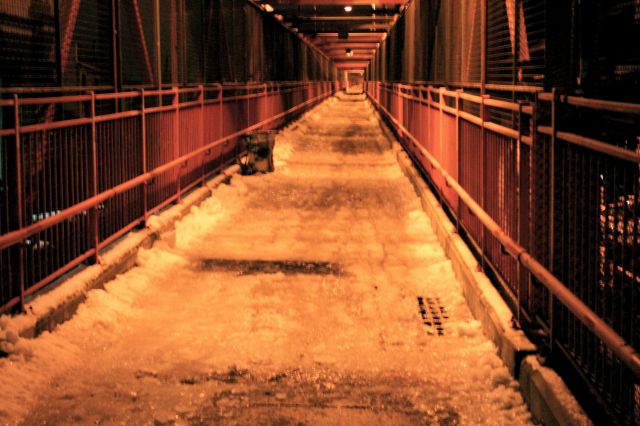 Chances are you're not trying to ride your bike anywhere today in this mess, but anyone who's tried to pedal over the bridges connecting Brooklyn with Manhattan this week was in for a treacherous trip, because the city has yet to adequately plow or salt the bike and pedestrian paths. As of last night, much of the Williamsburg Bridge path (pictured) remained impassible on two wheels, and commenters on Streetsblog say both the Manhattan Bridge and the Brooklyn Bridge remained unsalted and icy.

One cyclist had this utopian suggestion: "If it weren't a government operation, with 'not my job' rules and turf, it would be possible to stick a plow on that small police vehicle that patrols the bridge and have the cop clear it while patrolling." Another took to Craigslist to pen a heartfelt Missed Connection: "You were the two bridges connecting south Brooklyn with Manhattan. I was the solitary biker trying to make it across the boroughs and back home."

And yesterday the calls for protest began rumbling: "The Manhattan Bridge path is still covered in ice as of this morning. I'm pissed off. Anyone want to organize a ride in the vehicle lanes in to protest? Even if you ride really slowly as a pack over the bridge, it'd still be faster and safer than walking the bike over an ice rink."

A DOT spokesman tells us: "Crews plowed the bridges immediately after the storm over the weekend, and DOT again sent out multiple crews to plow the bridges and clear the bike lanes on Monday and Tuesday." If that's really true, all we can say is, "You're doing a heck of a job, Brownie!"