David Berkowitz, Son Of Sam, Was Arrested 35 Years Ago Today 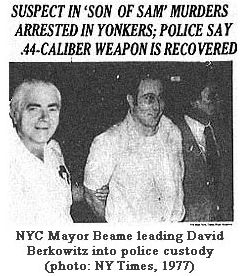 35 years ago today, David Berkowitz—better known by his psycho killer name: Son of Sam—was apprehended after confessing to killing six people (and wounding several others) in New York between 1976 and 1977. Two years ago he was denied parole for a 5th time, and we took a look back at his case (this year he was denied a 6th time).

Berkowitz was a Vietnam vet who lived in an apartment on Pine Street in Yonkers. He was part of a satanic cult there which allegedly began their killing spree by murdering dogs—at least a dozen were found near their meeting place in Untermeyer Park. He claims he first attacked a woman in late 1975, and first killed in 1976. He's currently serving out six life sentences.

Berkowitz is now 59 years old, and has changed his name to "Son of Hope"—this week he spoke out against the gun violence that the U.S. has seen over the past month. He said, from the Sullivan County Correctional Facility, “It’s all senseless. Society has to take the glory out of guns. Young people have no business carrying a gun. I would love to speak bluntly to those gangbanging teens and wanna-bes and tell them prison is nothing like what you think. If you’re packing a gun, you’re making a big mistake, and you’ll regret it.”

Here's a documentary which starts out noting that the city of New York was "experiencing a massive nervous breakdown" when Berkowitz was on the loose:

#david berkowitz
#flashback
#history
#son of sam
#original
Do you know the scoop? Comment below or Send us a Tip
A new Gothamist is coming! We’ve moved comments over to our beta site. Click here to join the conversation and get a preview of our new website.