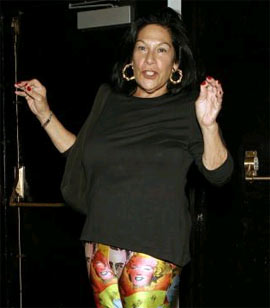 Linda Stein's daughter says that her mother had been recently diagnosed with a brain tumor and was, according to the Daily News, "taking medication that caused severe mood swings." Stein was found bludgeoned to death on October 30, and her personal assistant Natavia Lowery was arrested for her murder on Friday. Samantha Stein-Wells said, "My mother didn't deserve this.... They had just found a brain tumor a couple of weeks before she was killed. Everyone knew my mother was very sick. You could look at her and know she was sick."

Lowery allegedly told police that Stein was berating her, blowing pot smoke in her face, and making disparaging racial remarks. Lowery took a 4-pound yoga stick, beat the 62-year-old woman at least a half dozen times, and then mopped up the blood. Lowery also apparently took Stein's cellphone and ATM card, withdrawing $800.

Stein-Wells said, "If Miss Lowery had just walked out of the room and come back in 15 minutes, my mother would have calmed down." Stein's lawyer says that others knew that Stein's moodiness was exacerbated by medication, "People who worked with her knew this, and when she had one of her outbursts, they walked away. They did not pick up something and start swinging."

Lowery's family say she is innocent and emphasized that she and Stein were close, pointing out that Lowery got Stein to go to AA for her drinking. Her aunt, Julia Lowery, told the Post, "My niece doesn't fight. She is too afraid to break a nail or get a scratch on her face. She would wash Linda's hair for her every day - that's how close they were." She added that her niece thought Stein had "died from the cancer, drinking and smoking reefer."

Lowery is being held without bail at Rikers. She is charged with second-degree murder, but her lawyer says that he told police he didn't want them speaking to her without him present. The News' Michael Daly explains

The prosecution will likely emphasize that Lowery initiated the contact when she called police to complain about reporters at her front door. The detectives say she subsequently waived her right to an attorney.

The letter of the law appears to be on the side of the prosecution. But a judge may wonder how someone could submit willingly to hour after hour of interrogation and then finally confess to a homicide.

"It depends on who the judge is," an experienced investigator said.

Lowery was once charged with identity theft, but those charges were dropped. However, a college roommate told reporters that Lowery stole $250 from another friend. Stein supposedly told friends she may have wondered if Lowery was using her credit cards.