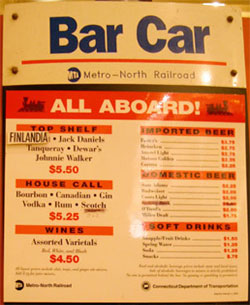 The Metropolitan Transportation Authority board decided yesterday not to act on a ban of alcoholic beverages on Metro-North and the Long Island Rail Road. Both railroads sell beer, wine, and liquor (along with soft drinks, water and snacks) from carts at Grand Central Terminal and Penn Station, as well as from bar cars on trains. Sales yielded a $1 million profit for the MTA, so the decision was probably more based on pure hard economics than anything else, although an MTA task force looking into the matter determined the sales did not pose a risk to the safety of commuters.

Even it the MTA did turn off the taps, there are bars in both Penn Station and Grand Central Terminal and commuters would still have been able to purchase alcohol to take with them on the train from stores that are not owned by the MTA in both stations. In fact many, including off duty MTA employees, choose to buy their booze from these retailers, since there is a better and often times cheaper selection on offer. Still, thousands of commuters signed petitions against the ban.

An MTA board member from Long Island, Mitchell H. Pally, who was pushing for the ban told the Times, "It is as if we were giving people a license to drink and drive, and that is unacceptable." Pally, who is still pushing for the ban commented to the Associated Press that he felt that, "In my mind, this is not a 'no harm, no foul' issue."

Fun fact: In 1963 the Long Island Rail Road developed its own cocktail called a "Dashing Dan" - 1.6 ounces of vodka on the rocks, a three dashes of orange bitters and a sliver of orange.