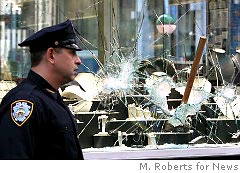 There's nothing like using a sledgehammer to break into the window of a Diamond District jewelry store. And that's what a group of robbers did at the Diamond Exchange on 47th Street and Sixth Avenue. A guard told the Daily News, "They hit the window where all the big pieces are."

What's wild is that the robber with the sledgehammer, Stephen Garrison, actually hammered away at the windows for two minutes (which was so loud it sounded like gunfire) - and left the 6-foot long hammer in the window! One witness told the Post, "Right after they broke the window, they just sauntered off. It wasn't until the owner chased after them that they ran." Ah, the "act-like-nothing-is-up" approach to robbery.

The thieves took at least $200,000 worth of loose stones and other jewelry; another jeweler believes the thieves "knew what they were doing" by targeting that particular display. Garrison was the only one caught by police officers at Broadway and 45th Street, and he was charged with robbery. The other two suspects are still at large.