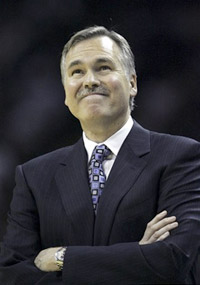 Mike D’Antoni was introduced as the new Knicks coach at MSG today, simply stating he was excited to be here before answering questions from the press. D’Antoni defended his reputation as a coach who didn’t emphasize defense saying that his teams averaged 58 wins over the past four years which means “our team was the best defensive club on the floor 58 nights a year”. He went out of his way to praise Donnie Walsh a number of times and Walsh reciprocated saying, “He can adjust his style to the personnel. We will work together to build this team to be competitive as quickly as possible.”

He would not offer a timetable for turning the team around, but promised, “We are going to play hard. We are going to be exciting. Put on the seatbelts and let’s go.” While rumors abound that D’Antoni is trying to get rid of Stephon Marbury already, he refuted those reports, “I have no problems with Steph whatsoever. I think he is a very talented basketball player and I look forward to working with him.”

When asked about changing the roster, D’Antoni wouldn’t address the matter directly, but he said his ideal players can “shoot, run, play defense and rebound and be great teammates.” Time to start the rumors of getting rid of the whole team!

It will be fascinating to see how D’Antoni adapts to New York and the reality of the Knicks. He dismissed the idea that New York is tougher than other places to coach in and he sounded convinced that he could turn the current roster into winners. Maybe it was the bluster of a new coach who is trying to show he isn’t fazed by the challenges ahead, but it seemed like D’Antoni has no idea what he is in store for. If the Knicks stick to their plan of rebuilding from the ground up there will be a lot of losing the next few years. And at first glance, D’Antoni doesn’t seem to be the type of guy who will be able to handle that.

By
Gwynne Hogan
and
Catalina Gonella