We know Mayor Bill de Blasio wouldn't dream of making a bold policy decision without first consulting his wife, Chirlane, but does he also consult his son, Dante? As local media made everyone worry about bread and (organic) milk during snow storm Hercules, NYC high school students across the city were urging the younger de Blasio to bug his dad to cancel class today. So now that schools have been closed, surely Dante's High School Approval Rating is through the roof! 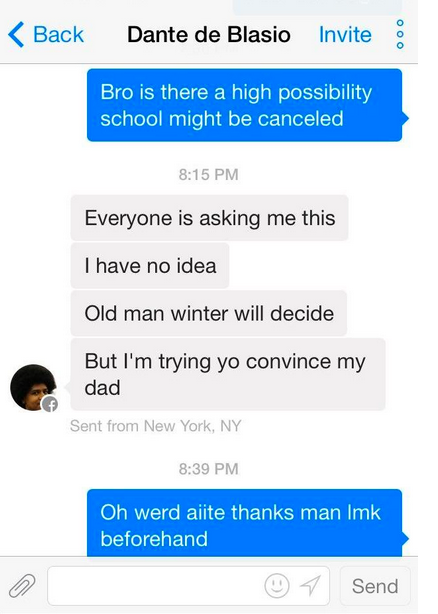 Other, similar messages apparently peppered Dante's Facebook page. "ayo dante," reads one. "can bill close school tomorrow? tell him imen asked." When Dante failed to respond to the earnest entreaty, "imen" upped the ante: "plz dante do it for america." Maybe Chiara was right to eschew social media after all, eh?

What Dante will be doing if he does not go to school tomorrow. pic.twitter.com/hizkGImhaD

Update: Dante did shovel the sidewalk this morning! His dad took a pass, but now the 16-year-old is in charge.

During a Q&A this morning, Mayor de Blasio addressed questions about Dante's involvement in the decision to close schools. De Blasio said, "If Dante didn't lobby me, there would be something wrong with him!" pointing out his son is 16. However, Dante's wishes didn't factor into the decision—it was the bitter cold temperature and the fact officials didn't want small children in this weather.