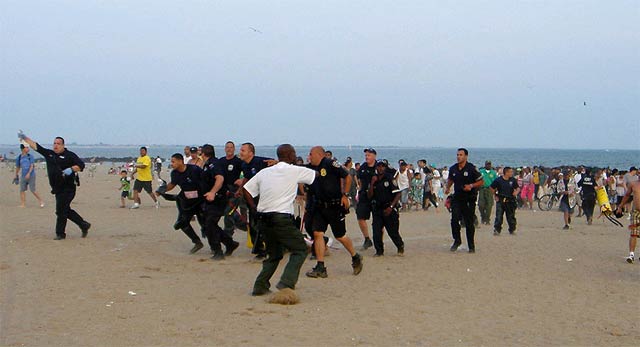 This past weekend, the Coast Guard, NYPD, FDNY and other groups looked for swimmers missing off local shores but ultimately did not find any of the three people who were apparently caught in riptides. Since Friday, four other people drowned off NYC and Long Island beaches.

On Friday, two people drowned and two others were missing off Long Island and the Rockaways, while a man drowned off Long Beach on Saturday. The family of 10-year-old Akira Johnson, last seen swimming at Coney Island on Saturday, was sad, frustrated and angry. Her father told the Daily News, "There should have been more lifeguards. It's frustrating because we don't know where she's at."

Out on Long Island, the NY Times reports the Long Beach chief lifeguard thinks the drownings off his beach could have been avoided; Paul Gillepsie said, "People are not supposed to go into the water after we close. But a lot of people stay on the beach. They pay to get on the beach, they want to get the most out of their weekends. But they’re uneducated about the water. They don’t realize how dangerous the Atlantic Ocean can get.”

#atlantic ocean
#coney island
#drownings
#long beach
#missing swimmers
#riptides
#rockaways
Do you know the scoop? Comment below or Send us a Tip