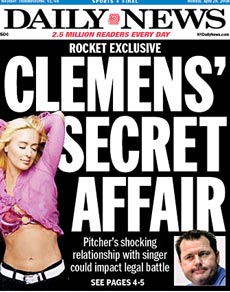 Could this year get any worse for Debbie Clemens? Not only has the wife of embattled pitching ace Roger Clemens been accused of taking HGH with her husband, now sources says she knew about her husband's alleged 10-year affair with country star Mindy McCready, who was 15 (that's Miley Cyrus's age!) when it started!

Sources tell the Daily News that Clemens met McCready when she "was a 15-year-old aspiring singer performing in a karaoke bar and Clemens was a 28-year-old Red Sox ace and married father of two." Clemens's lawyer told the Rocket "flatly denies having had any kind of an inappropriate relationship with her. He's considered her a close family friend. ... He has never had a sexual relationship with her."

Among the rumored details: They met when "Clemens threw a shirt with his and several teammates' signatures onstage" at the bar where McCready was singing karaoke; Debbie Clemens knew of the affair; Clemens would send McCready FedEx packages of cash; they would take trips to Las Vegas and NYC (one time, they "holed up in the trendy SoHo Grand and later partied with Monica Lewinsky and Michael Jordan").