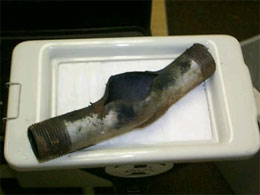 After scaring residents of two boroughs when a woman discovered a pipe bomb on her Jeep Cherokee, police arrested Baudelio Rodriguez for making a pipe bomb and placing it on a car. What makes the story more strange is that it was Rodriguez's daughter who discovered the bomb - the Jeep belongs to his daughter and his wife! He was reportedly angry at his wife for leaving their Brooklyn home and staying with their daughter in Staten Island.

When the Emergency Service Unit responded to the report of the pipe bomb, found under a windshield wiper, they evacuated a few streets in the Great Kills section of Staten Island. The police used a robot to inspect and pick up the bomb, finding that its fuse was not lit. Then they went to Rodriguez's Sheepshead Bay home to look for him, evacuating that neighborhood before raiding the house, but he was not there. Rodriguez finally surrendered at his sibling's Ditmas Park home early Sunday morning and he was charged him with "reckless endangerment, attempted arson, unlawful dealing with fireworks and violating a court order of protection."

The Staten Island Advance spoke to Rodriguez's Sheepshead Bay neighbors, who said that he had tried to commit suicide last month. A neighbor of Rodriguez's daughter on Staten Island said, "I just moved here from Brooklyn two years ago and we never had these problems there. I just had a newborn baby boy two weeks ago. Who needs this?"

Photograph of a different, detonated pipe bomb from the FBI