Prosecutors will not pursue criminal charges against the father whose one-year-old twin daughter and son died last week after police say he left them in his car for about eight hours while he was at work.

Juan Rodriguez was initially charged with two counts each of manslaughter and criminally negligent homicide. Rodriguez appeared in a Bronx courthouse with his family on Thursday morning, where the Bronx District Attorney Darcel Clark decided not to put it before a grand jury at this time, pending further investigation.

"We are speaking to the district attorney's office to convey to them what I think that they know and understand. That this was a horrific and terrible tragedy," Rodriguez's attorney Joey Jackson said, according to ABC. Rodriguez has another court date on August 27th.

On Friday morning, Rodriguez, a 39-year-old Iraq War veteran headed from his home in Congers in Rockland County to his job as a social worker at the James J. Peters VA Hospital in the Bronx. Just after 4 p.m., police say they were called to West Kingsbridge Road and Kingsbridge Terrace, where officers found 1-year-old Luna Rodriguez and her twin brother Phoenix Rodriguez in rear-facing car seats in the backseat of the car. EMS pronounced the babies dead at the scene.

Rodriguez had gone back to his car after his eight-hour shift and started to drive away when he realized what had happened. He nearly crashed into Bedford Park resident Pedro Roman, who told Gothamist, "He stopped at the light here and cut me off and then he pulled over there," pointing to a new building that houses The Jericho Project, which provides assisted living to formally homeless veterans. Roman continued, "He stopped the car and opened the doors and he said, 'Oh my God, oh my God,' three times."

"I killed my babies!... I left them in the car!", the father also reportedly yelled. 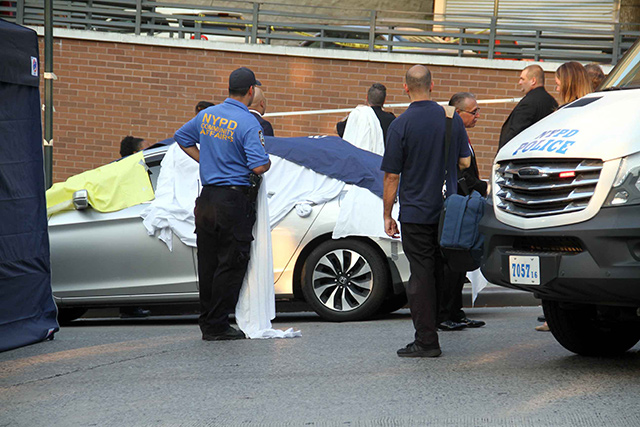 On his way to work, Rodriguez had dropped his 4-year-old off in Westchester "at a different day care before forgetting the twin babies," according to the NY Post. "I assumed I dropped [the twins] off at day care before I went to work," he reportedly told cops at the scene.

The criminal complaint noted that Rodriguez told investigators that he "blanked out." Rodriguez's lawyer Joey Jackson said, "This is a tragedy of horrific proportions. My client, under no circumstances, meant for this to occur at all... Everyone is still trying to come to grips with the horrific nature of this circumstance. Certainly, his wife and his loving family support him. He's mindful of the fact that he has to live with this every day of the rest of his life."

After pleading not guilty at a hearing on Saturday, Rodriguez was released on $100,000 bail. His wife, Marissa Rodriguez, later

#bronx
#HOMICIDE
#HOT CAR DEATH
#JUAN RODRIGUEZ
#LUNA RODRIGUEZ
#PHOENIX RODRIGUEZ
Do you know the scoop? Comment below or Send us a Tip