The Manhattan DA's office has decided against prosecuting the cab driver who struck a cyclist and jumped the curb outside Rockefeller Center last August, hitting a British tourist on the sidewalk and severing her leg. “Following a thorough, two-month-long investigation by the District Attorney’s Office and the NYPD, we have concluded that criminal charges cannot be filed in this case," Joan Vollero, a spokeswoman for Manhattan DA Cyrus Vance, said in a statement.

The cab driver involved in the crash, 24-year-old Mohammed Himon, had a checkered driving record before he struck 23-year-old Sian Green as she sat eating lunch. Previously, Himon had been cited for speeding and running a red light, and was involved in an accident in 2010 in which one person was injured.

After he hit Green, police issued Himon an administrative summons for unauthorized operation of his vehicle, which carries a possible fine of $100 to $350, and the TLC suspended Himon's license for 30 days. At a press conference and in media reports, Himon blamed his behavior on the cyclist he struck prior to hitting Green. Himon has since returned to driving a cab. 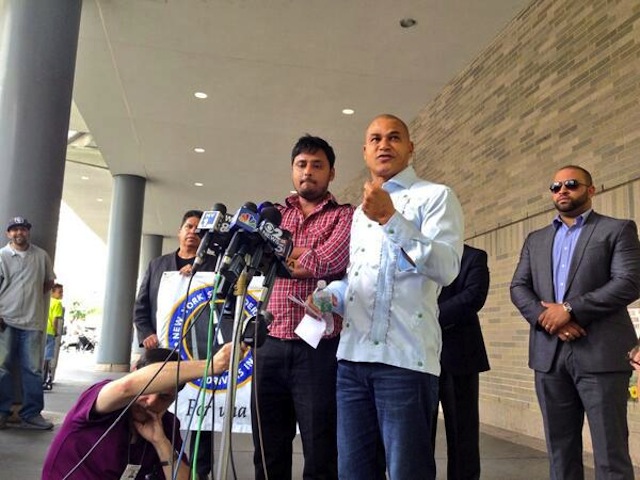 Himon, in a plaid shirt, addresses the media outside the hospital where his victim was being treated (Via @TraceeCarrasco's Twitter)

In making their decision to not prosecute Himon, Vollero said that "prosecutors who are specially trained in vehicular crimes reviewed all available evidence and took into consideration relevant sections of the State’s Vehicle and Traffic Laws. They conducted interviews with multiple eyewitnesses, the taxi driver, the bicyclist, and injured parties, reviewed all available video surveillance, listened to numerous 911 calls, and retrieved the taxi’s ‘black box’ data."

Vollero added, "We are sensitive to the trauma faced by Ms. Green and others injured in vehicular crashes, and notified the attorneys and representatives for all parties last week of this decision.”

In a statement, Green's attorney, Daniel Marchese, said the DA "indicated that failure to charge was due to lack of evidence regarding the taxi cab driver's intent during the investigation phase."

Attorney and cycling advocate Steve Vaccaro said in an email that he was "stunned" by the DA's decision.

"To prosecute the driver for recklessness or criminal negligence, it is not required for the driver to have intended harm. All that is required is that the driver be proven beyond a reasonable doubt to have behaved, with respect to the risk of striking or injuring others, in a manner that constituted a gross deviation from what was reasonable."

Vaccaro points to Himon's own admission that he accelerated into Green as proof that he deviated from what would be considered reasonable behavior.

Marchese called the incident a "negligent act of calculated recklessness to which my client was the victim. We will continue to aggressively pursue legal action to help remedy this tragic incident that changed Sian’s life."