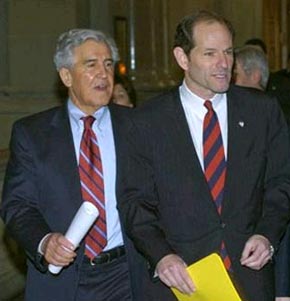 Governor Spitzer can rest a bit easier now: The Albany County DA found that the governor's aides broke no laws when they tried to use the state police to discredit a rival, State Senate Majority Leader Joseph Bruno. DA David Soares will release a report today, but in the meantime, his spokeswoman's statement said, "This office found no illegal conduct. To the contrary, we found that the governor, his staff, and the New York State Police were acting within their authority in compiling and releasing documents to the media concerning the use of state aircraft."

The NY Times calls the news a "victory for the Spitzer administration," which was hurt by Attorney General Andrew Cuomo's July report chastising the Spitzer aides' attempts to use state police records to smear Bruno. Spitzer had answered questions from the DA's office earlier this week and is office issued a statement: "The governor is gratified by the conclusions reached by [Soares] and looks forward to reading the report."

Naturally, the state Republicans aren't that happy with the report. Bruno still want to focus on investigations into the matter and State Senator George Winner, the Republican who heads the Senate Investigation Committee, told the Post, "I'm not totally surprised [Soares] didn't bring criminal charges, but to thoroughly whitewash this is over the top." (Soares is a Democrat, like Spitzer.) And the Senate's Public Integrity Commission, created because of this scandal, will be looking at the incident this fall.

By the by, the Post's headline made us gag and giggle at the same time: DIRTY TRICKS' PROBE COMES UP CLEAN