DA Morgenthau May or May Not Retire Early 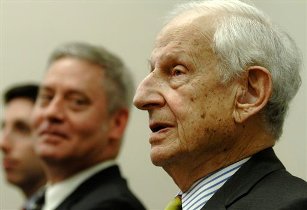 Robert Morgenthau's stranglehold on the position of Manhattan District Attorney has lasted 33 years but today's Post tittered that he was mulling an "early exit." Page Six reported that a "well-connected legal source" said the 88-year-old DA was orchestrating a retirement to have Cyrus Vance Jr. installed for a few years.

Apparently Morgenthau wants Vance Jr., once an assistant DA, in place to block his former protegee and 2005 Democratic primary opponent Leslie Crocker Snyder, who started the first sex crimes unit, from running for DA. But Morgenthau's spokeswoman says the Post is wrong - which means the Daily News loves having the chance to call its rival on it.

Barbara Thompson says the octogenarian is running for re-election (!) and tells the Daily News, "There's not a word of truth in it. He's got a fund-raiser January 10 and he really didn't think people would believe unfounded items in gossip columns." Plus the News says that a special election would be held if a DA left office early - the governor would only be able to place an interim DA.

Recently, Morgenthau announced the creation of an immigrant affairs unit. He has said that Robert Chambers will remain in jail "for good," he's lobbied for the legalization of pot, and he looks hilarious in this 2005 Observer illustration. The role of Adam Schiff, the crusty DA played by Steven Hill for many seasons on Law & Order, was reportedly based on Morgenthau; in the new season of Law & Order, Sam Waterston's Jack McCoy finally becomes DA, taking over for Arthur "Fred Thompson" Branch."