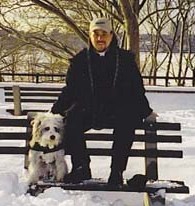 A Manhattan dog walker was charged with stealing more than $50,000 from the 84-year-old mother of a client. According to the NY Sun, the Manhattan DA's office says that Daniel Natale, who runs Luna Dog Service, "allegedly used a checkbook, credit cards, and a debit card to steal cash."

Natale met Isabel Zakin through her daughter four years ago. Zakin told the Post that her broken hip "made it impossible for her to walk" Tibetan spaniel Lily, so she asked Natale for help. Since he was being evicted from his apartment, he would walk the dog as well as run various errands for her, in exchange for living in a guest room in her Riverside Drive apartment. We bet dog owners who relied on Natale are probably breathing a sigh of relief - unless they opened their homes to him too!

One of the errands Zakin trusted Natale with was helping her with her banking. The DA's office says that Natale stole $36,618, via debit cards, from her Chase bank account and $14,660 from a Citibank account. He also opened a credit card in Zakin's name and added himself to one of her other credit card accounts.

Natale is held on $15,000 bond and admitted to stealing at least $15,000. Zakin told the Daily News, "He's charming and warm and friendly. Of course, those are personality traits that are prerequisites for this kind of career." Related: urbanhound has tips on dog daycare, boarding and walkers.

#A Manhattan
#crime
#daily news
#manhattan
#manhattan da
#news
#ny sun
#Riverside Drive
#The DA
Do you know the scoop? Comment below or Send us a Tip