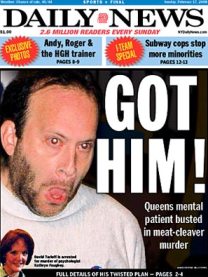 As David Tarloff is held in the murder of therapist Kathryn Faughey, the Manhattan DA's office is planning on showing how the crime was premeditated. Tarloff was charged with second-degree murder, second-degree attempted murder (when he slashed another doctor, Kent Shinbach), and first-degree assault.

One imagines Tarloff, who is schizophrenic, might claim insanity, but the Post reports evidence, like "surveillance video showing David Tarloff scoping out an escape route," may give prosecutors a strong case. After fatally stabbing Faughey 15 times and attacking Shinbach, he escaped the building through the basement. Tarloff claims he wanted to rob Shinbach - who had Tarloff committed in 1991 - to finance a trip for her and himself to go to Hawaii.

In the meantime, State Senator Eric Adams suggested the city prevent therapists from having offices in residential buildings. Adams admitted someone like Tarloff would still have been able to attack, because he was not a regular patient of Shinbach's, "But this situation illustrated the danger that many people in residential buildings are exposed to every day."

WCBS 2 interviewed two men who were part of Tarloff's police lineup. One said, "The thing about it is, he kinda admitted it right then and there. He was just blurting out things in the room...He blurted out that he did it: 'I'm sorr... I didn't know she was there ... '"

Tarloff will undergo a psychiatric examination to see if he's fit to stand trial. And his case raises questions about what can be done for the mentally ill; his family had him committed a few times, but they say hospitals kept releasing him. His brother Robert said, "We've tried many times to get him to stay in the place ... and unfortunately it took something like this to bring this out. He's been in and out for a long time."