A few days ago City Councilman Eric Ulrich (R-Queens) lamented that he's "never, never seen a cop car pull over a bicyclist for running through a red light. I wish they would, because those are the ones who are creating problems every day in the city." Well, it looks like Ulrich's wish has come true: for the second time this month, a cyclist in Central Park has been shocked to find cops pulling him over for running a red light. Today's report comes from composer Alec Hall, who tells us he, along with another cyclist, got caught in a dragnet in the park yesterday:

I was biking uptown on the East Central Park drive at approximately 3:00 when I was pulled over along with another cyclist for "running" one of the many traffic signals in Central Park. The light was red but the vast majority of these lights have no intersecting traffic whatsoever. There was a trap set-up with two officers in front of the light and three beyond it.

The other cyclist and I were issued standard red-light tickets of $270 without discussion, without warning, nothing... One officer beyond, who was not the ticketing officer however, claimed that since it was a first offense and I was "not a motor vehicle" that I wouldn't have to pay a fine. According to NYS law though, this is completely false—bicycles fall under the same legislation concerning motor vehicles, and the first offense isn't $0, it's $270!

Here's a copy of Hall's ticket: 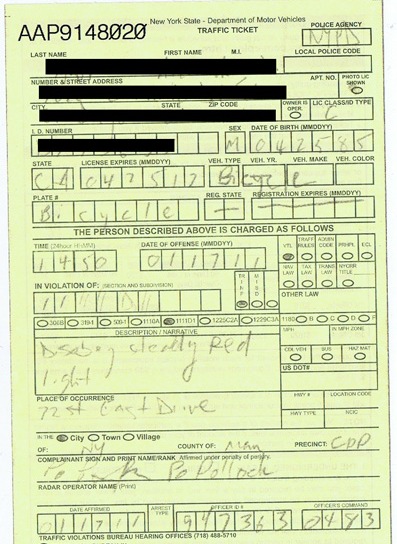 One assumes this is part of the NYPD's promised citywide crackdown on scofflaw cyclists. (The NYPD has not responded to repeated requests for comment.) Cycling advocates say the NYPD's focus on bicyclists is disproportionate to the department's policing of auto drivers, whose vehicles cause death and injury in significantly greater numbers. On the other hand, Central Park is a haven for perambulators, and cyclists are often observed blowing through red lights intended to give pedestrians a chance to cross.

But Hall is outraged by his experience, and has vowed to fight the ticket. "As far as I can see this is essentially tantamount to the criminalization of recreation in New York City," Hall tells us. "If people can't go cycling for pleasure in Central Park without having to stop for countless, and ostensibly useless red lights, where else can we go? One really has to admire the combined administrative efforts of Giuliani and Bloomberg for turning New York into a mindless, sterile, corporatist playground where only the wealthiest people on Earth can have any kind of standard of living."

#bicycle crackdown
#central park
#cycling crackdown
#red light
Do you know the scoop? Comment below or Send us a Tip