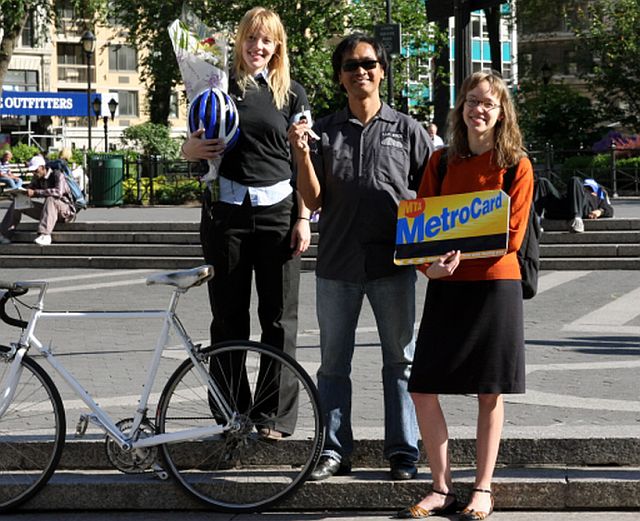 The 7th Annual “Great NYC Commuter Race” went down this morning, with three commuters racing to see who could get from Fort Greene to Union Square during rush hour in the least amount of time. Social worker Jamie Favaro traveled by bicycle; April Green, who works at an art foundation, took a foolish bus/subway combo; and photographer Emmanuel Fuentebella made irresponsible carbon footprints with his car.

And like the story of John Henry, the human using a simple tool triumphed over machine, with the cyclist arriving first in 16 minutes. But unlike that classic folktale, Favaro didn’t die of a heart attack when it ended; instead she lorded it over her lazier competitors with a cyclist’s characteristic self-satisfaction: “A leisurely ride through brownstone Brooklyn and across the Manhattan Bridge was a great way to start the day. It looks like the bicycle will reign as the fastest commute for another year.”

The race began at the Connecticut Muffin on Myrtle Avenue, and finished after the subway rider returned to the earth’s crust at Union Square after a humiliating 29 minutes, blaming the loss on her abnormally large MetroCard. The driver came in second at 22 minutes, a reversal from last year’s third place finish. The annual race is organized by Transportation Alternatives and Bike Month NYC as a way to illustrate the efficiency of bicycle commuting; cyclists have dominated the competition, which is not monitored by any independent governing body, every single year.