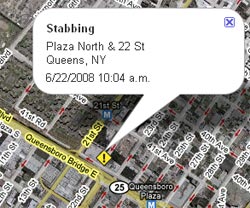 A woman was stabbed in the chest yesterday morning by a man on a bicycle. The woman, 37-year-old Eduarda Olivia, had been walking in the Queensbridge section with her 13-year-old daughter when the sudden attack occurred. She was taken to NY-Presbyterian Hospital Weill Cornell, where she is currently in stable condition.

According to police, the man just cycled up to her "plunged a knife into her chest." He did not rob Olivia or harm the daughter. A witness, an employee of the show "Gossip Girl" which films at Silvercup Studios nearby, told the Daily News, "[The cyclist] looked like he was riding and thinking about what he did. He didn't look like he was running away."