Cyclist Slapped With $1,555 In Fines During A Single Traffic Stop Today WNYC reported that the "cycling crackdown" of 2011 has mellowed into a "slightly kinder and gentler" pattern of "more focused" enforcement on the part of the NYPD. Tell that to this Brooklyn cyclist, who recently received three tickets for running red lights and a ticket for wearing headphones totaling $1,555.

The cyclist, who asked that his name not be published, said he was biking home to Bushwick from Williamsburg last month when he turned right on a red light from Lorimer Street to Grand Street and continued biking down Grand, checking for pedestrians and cars, but continuing to run red lights through Leonard Street and Manhattan Avenue, when a police cruiser "cut me off in the bike lane and I stopped."

He began asking me what I thought I was doing and we discussed what had just happened, he asked for my opinion on what I thought certain bike laws should be but quickly dismissed my answers as wrong.  He told me I went through 3 red lights and I was wearing 2 headphones so he wrote me 4 tickets.  He couldn't give me a price of how much the tickets would be, but estimated it would total around $700.

I was guilty for sure of going through the lights and wearing headphones so naively I pleaded guilty and sent in the tickets.  A few weeks later I got a letter in the mail, it contained my 4 tickets stapled to a piece of paper that indicated I owed $1555. It didn't itemize the cost of each ticket so I have no idea what each one is worth.

"The point [of the increase in fines] is to harshly punish recidivists," attorney Steve Vaccaro says. "But a person who goes through three reds in a row is not really a recidivist." (This is a recidivist.) Vaccaro says that while cops can follow motorists and cyclists for as long as they like, racking up numerous infractions, "this kind of following almost never happens with motorists, but happens surprisingly often with cyclists."

"Many traffic court judges will treat multiple violations issued this way as 'double-dipping' and dismiss some of the duplicative charges," Vaccaro adds. When asked if cyclists should think twice before pleading guilty to multiple citations of the same law, Vaccaro replies, "Yes."

"This is my first bike infraction in New York City," the cyclist says. "$1,500 seems pretty excessive, especially for a 24-year-old where $1,500 is a little less than 10% of my yearly income." While the "gentle" crackdown on cyclists continues in 2012, the NYPD's enforcement of traffic laws has decreased, despite an increase in traffic fatalities from last year.

Here's the letter the cyclist received: 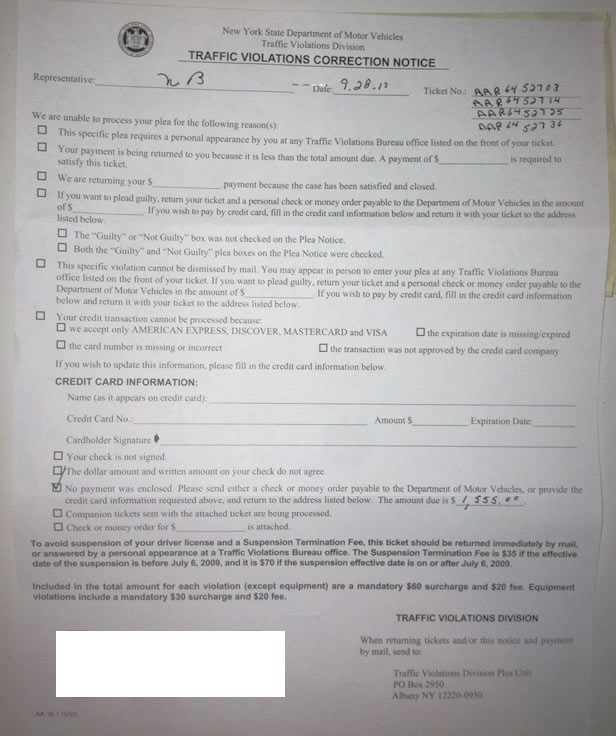 #bike lanes
#cycling
#cycling crackdown
#red light tickets
#original
Do you know the scoop? Comment below or Send us a Tip