A cyclist is clinging to life after a hit-and-run driver plowed into him Saturday while fleeing from cops following a violent mugging in Manhattan. Cyclist Al-Matin Mohamed was riding in a bike lane on E. 29th Street around 6:30 a.m. Saturday when the Infiniti barreled into him while going the wrong way down the street. “His feet were on the sidewalk. The rest of his body was on the street,” witness Cecilia Cargill, who went to help Mohamed, told the News. “He was fighting, fighting, fighting. At first he was unconscious, but then he opened his eyes. I told him not to give up...He was dying. I started praying.”

“He looked into my eyes as I was praying for him. It looked like he was saying, ‘I’m dying, pray for me,’ ” she added. Mohamed suffered head trauma, two broken legs, a fractured pelvis and a broken arm. He recently moved to NYC, and was working a one-month stint with pastry chefs at Le Bernardin on W. 51st Street. 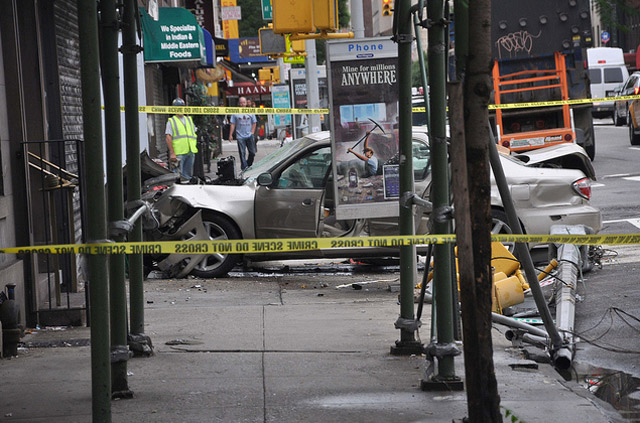 "He was easily going 40 to 50 mph," cabbie Robert told the Post about the driver. "It was a loud crash. You could hear the steel of the pole dragging across the street." The driver crashed into a local laundromat, abandoned his car, and fled the scene on foot eastward.

Police say the incident was sparked after the driver was involved with a mugging: he and an accomplice allegedly punched a 28-year-old man and grabbed his watch and bag near Penn Station at 34th Street and Seventh Avenue. The accomplice ran off, but the mugger got in his car, running over a cop’s foot and hitting a 23-year-old woman before speeding down Sixth Avenue, and eventually hitting Mohamed.