A cyclist is demanding accountability after she says an Uber driver attacked her at a stoplight in Williamsburg, and officers on the scene refused to take a police report.

Lee James, a bike messenger by day, was riding on Havermeyer Street near the foot of the Williamsburg Bridge at around 10:30 p.m. on August 4th, a Thursday, when it happened.

There was nowhere to go, because the gutter was clogged with double-parked cars near Mr. Piña. The guy honked and I looked over my shoulder like, "Yo." At that time, I had no idea, but I left a slight [handlebar] residue on his window, which happens maybe one out of 25 times: I touch a car when I go between them. I think that's why he hopped out of the car, I think, but I'm not sure. He went wild on me.

James said that at the next red light the driver, Farrukh Rakhmankulov, got out of his white Toyota sedan and yanked her off of her bike, sending her tumbling to the ground in front of a line of drivers and a sidewalk packed with pedestrians. According to James, she yelled for help and asked, "Why?" As she remounted her bike, she says he grabbed her again and threw her to the ground a second time.

"It was pretty shocking to have somebody lash out for no reason at all," she said. 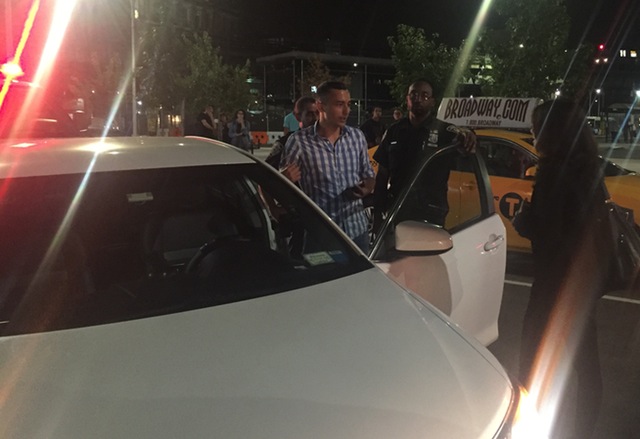 Uber driver Farrukh Rakhmankulov and two NYPD officers who a cyclist says let him get away with assaulting her. (Lee James)

The manhandling left James with scrapes and bruises on her legs, arms, and back, she said. Rakhmankulov went and summoned two officers sitting nearby in a patrol car, according to James, who said the police response was also disturbing.

James recounted that the cops acknowledged seeing the attack, and though pedestrians and the hack's two fares offered to serve as witnesses, the officers discouraged her from filing a police report.

After getting both side's stories, the cops purportedly told her that her schedule is probably too busy for her to attend the necessary court dates, and that prosecutors would be likely to drop an assault charge to harassment anyway. One privately tried to explain away the cabbie's behavior, saying, "The guy had a bad day," and adding that his father was a cab driver who "used to beat people up all the time."

The officers also pledged to ticket the driver, but said an accident report wouldn't necessarily help James, and didn't provide one, she said.

Adding to the sting of repeatedly hitting the pavement, the whole encounter was, James said, colored by sexism. For example, after resolving not to charge the driver, the officers arranged for Rakhmankulov and James to shake hands, she said.

I was like, "Why are you giving me such a weak handshake?" And the officer goes, "Oh, he's just trying to be gentle with you."

I was like, "Why the fuck is he trying to be gentle with me now?"

In parting, the officers purportedly promised to lecture the driver and yell at him "like a little girl."

Not content to let the incident go, James complained to Uber, which after nine days of back and forth, informed her that Rakhmankulov had been permanently suspended from using the ride-hailing app. The company has no say over its drivers' ability to operate for other cab and ride-share companies, though, so James is pursuing a separate complaint with the Taxi and Limousine Commission, which regulates hack licenses. Also angry about the lackadaisical police response, she is pursuing a claim with the Civilian Complaint Review Board.

As of Saturday, Rakhmankulov still had an active TLC license, according to city records. He is affiliated with Danach-NY, one of five Uber bases shut down by the city briefly in early 2015 after Uber failed to provide required data. The base did not return a call seeking comment. 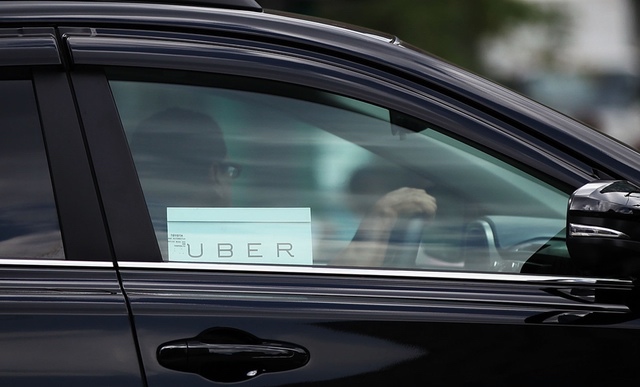 An Uber spokeswoman said the company has reviewed GPS data and found that Rakhmankulov was not using the service the night of August 4th. She suggested that he could have been using another ride-share app at the time. (A Lyft spokeswoman said he wasn't using that platform at the time, either.) James said the passengers insisted on ending their ride at the scene, and one indicated it was booked using Uber.

A TLC spokesman confirmed that the agency is investigating the incident. The spokesman, Allan Fromberg, said TLC rules allow drivers to accept dispatches from bases other than the one their car is registered to, and it's not uncommon for drivers to use multiple apps.

James has biked professionally for two and a half years, and lately has taken to participating in regular group rides with the women cyclist crew FWOD. She said that her experience early this month is indicative of two larger patterns endemic in New York and elsewhere: one, of law enforcement shrugging at aggression towards cyclists, and the other of women facing harassment as they go about their business in public.

"As a woman I get street harassment constantly, constantly. It happens every day, day in and day out," she said. "People stare...I'll get honked at or chased for nothing."

She compares notes with her cyclist boyfriend, and she said, the experiences are "radically different."

"It's just the fact that I exist on a bike," that seems to upset men, she said.

She also follows local news involving cyclists with great interest, she said. What she sees troubles her.

I don’t know why the NYPD hasn’t released the name of the driver who killed Matthew von Ohlen. They know who the car belongs to. I said that to the officers. They said, "Yeah, we know. We just walked down the bike side of the Williamsburg Bridge"—when they were responding to [an] incident—"and bikes were just whizzing past us." Well, you're on the bike path of the bridge!

One of the two officers provided James with his personal phone number, saying he could vouch for what happened in whatever accountability process she initiated herself. He did not respond to a call seeking comment.

Rakhmankulov could not be reached.