Mayor de Blasio is touting Vision Zero as a success, pointing to record low pedestrian deaths and announcing plans to implement needed safety measures to some of the city's worst thoroughfares in the coming year. Traffic fatalities decreased 15 percent from 2013, and pedestrian fatalities decreased 27 percent. All told, the streets are trundling toward becoming slower and more hospitable for everyone who uses them.

But while crashes as a whole went down, cyclist deaths rose precipitously—20 in 2014, versus 12 in 2013. It's a concerning spike, causing advocates to wonder whether the new administration is, in fact, focusing enough of its attention on bikes specifically.

Paul Steely White, executive director of Transportation Alternatives, said that the administration did an admirable job in its first year improving street quality in the general sense—lowering the speed limit, implementing arterial slow zones and installing speed cameras in school zones were laudable achievements. But this year, White expects more.

"We know that streets with protected bike lanes have seen marked double-digit reduction in casualties to all road users, and so we’ll be looking to many more of those treatments in the coming year, especially with the imminent expansion of Citi Bike," he said in an interview, adding that only one of the 20 cyclist fatalities in 2014 occurred inside the Citi Bike zone.

White emphasized the importance of protected bike lanes in particular, noting that they offer a crucial physical buffer between cyclists and cars, as well as pedestrians. But protected bike lanes do come with a higher cost than lanes integrated into the existing roadway, in addition to the fact that many drivers are rankled by any plan that involves shrinking lanes of traffic or, even more disastrously, sacrificing a few parking spots. 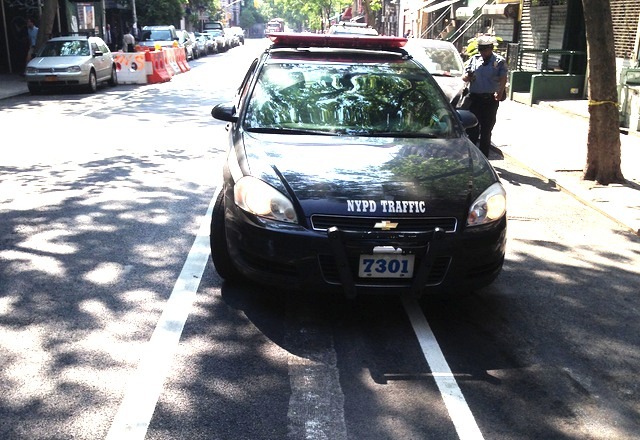 But attitudes toward protected bike lanes have softened in recent years, with even the non-cycling public acknowledging the obvious safety improvements that such changes bring. White attributes the shift in perception to an aggressive—and successful—public education effort.

"I think most people would have thought that the reduction of the speed limit or the expansion of speed cameras or safety cameras would have been more controversial, but we really saw widespread support," he said.

Moreover, White asserts that bike lanes are no longer the fraught issue they once were. The once-contentious Prospect Park West bike lane, which stirred up a maelstrom of controversy and lawsuits when it was introduced, would likely elicit little more than an irked grumble from residents were it introduced today. "The debate has really evolved a lot just in the past few years," he said. "We’ve really seen what was left of the 'bike lane truther' movement fade into the woodwork—I think we’re well past those days."

White said that while he's heartened by the street improvements made in 2014, he expects an "iron-clad commitment" from the city that its network of protected bike lanes will continue to spread in the coming year.

"I think that 2014 was really the year of the pedestrian in New York City, and I think that was for good reason, because just looking at the numbers you could see just how many New Yorkers were dying," he said. " I think that the primacy on pedestrian safety was evident in the year in numbers and I think that’s just a terrific indicator that, where the city does focus its energy, they can absolutely save lives.

"I think there is a strong realization now that bicycling needs to be a much stronger aspect of Vision Zero, and we’re looking forward to the mayor and the transportation commissioner following through on that commitment."

Wiley Norvell, de Blasio's deputy press secretary and the former spokesman for Transportation Alternatives, said in an interview that the administration has achieved a lot in its first year, citing five miles of protected bike lanes along Lafayette Avenue and Hudson Street in Manhattan, as well as improving Kent Avenue's lane in Brooklyn. The DOT reports that it also installed roughly 2,100 bike racks in 2014, in addition to overhauling the city's troubled Citi Bike program, with long-awaited expansions expected to finally come to fruition this year. Plans also include adding roughly 50 miles of bike lanes along "routes like" Staten Island's Clove Road.

"Safety and change in behavior are not instantaneous, they’re cumulative—the process of multiple interventions over time," Norvell said. "Our work on Vision Zero is not something we believe is linear. It's something that grows and accelerates over time, and last year was just the first year. Obviously we still think we have a pretty significant body of work there that is worthy of recognition."

Norvell's sentiments echoed those of the mayor during a press conference on Tuesday, who also referred to the effect of the administration's efforts as "cumulative" before deferring to DOT Commissioner Polly Trottenberg, who expressed her displeasure with the number of cyclist fatalities.

"One fatality is too many, but that is a number we’re taking a close look at and trying to do diagnosis about what happened," she said. "And part of our plan for 2015 is going to be continue to build out safer bike infrastructure, including protected bike lanes. So we’re never going to rest when it comes to making sure we’re making each part of the system safer."

Among the plans for the new year are a dramatic redesign of two of the city's most notoriously hellish thoroughfares—Queens Boulevard and Linden Boulevard, though insight into what exactly that will entail is scarce. Still, it's something.

"You would not have heard in the last five years a DOT commissioner publicly say the words 'bike lane on Queens Boulevard,'" Norvell said. "I would not downplay the significance of that having happened for the first time after years of when that was decidedly off the table."

#bike lanes
#bike safety
#cycling
#dot
#vision zero
#original
Do you know the scoop? Comment below or Send us a Tip