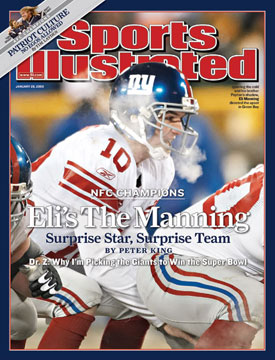 Last week, Brett Favre was on the cover of Sports Illustrated. This week, Eli Manning graces the cover of the magazine. If you believe the S.I. cover curse/jinx, then the Giants may be in trouble. In the magazine, Peter King gives the Giants-Packers game the cover story treatment, while Dr. Z decides to pick the Giants to make up for picking against the Jets in Super Bowl III.

We're not sure if Manning believes in the S.I. jinx, but he does have other superstitions. After all, he did make his fiancée sit in the stands during the Green Bay game and his brother Peyton stayed away to prevent another bad game by Eli.

Obviously there are many, many athletes that are featured on Sports Illustrated's cover which don't see any adverse affects, but there's at least one local team that hasn't had the best luck recently. The Mets were on a July, 2006 cover and they lost later that year in the NLCS. The team was again featured in June, 2007, a season with an epic collapse to miss the playoffs.

But let's not read into the cover curse too much though. After all, Tom Brady & Matt Light are both on the cover as well. Albeit in a much less prominent role. Maybe S.I. will be kind enough to do a cover story on Brady, Randy Moss, Bill Belichick, or any other member of the Patriots next week. Or maybe those nonsensical Bridget Moynahan masks will do the trick.