Homelessness in New York City is at an all-time high thanks to the chronic housing shortage, wage stagnation (and for low-income workers, wage decline), and Governor Andrew Cuomo and former mayor Michael Bloomberg's elimination of the Advantage rental assistance program in 2011, among other factors.

Mayor Bill de Blasio has poured energy and resources into reversing the trend and backing away from noxious Bloomberg policies such as placing shelter residents in apartment buildings at luxury rent rates with little oversight to ensure service provision, or even basic standards of repair. Money he has committed to providing legal services to people facing eviction, and to creating new voucher programs to replace Advantage have kept the record high shelter population of about 60,000 from creeping even higher, but massive problems persist throughout the shelter system, and the massive load of people in need of shelter means the city is rapidly repurposing hotels for use as shelters, recreating many of the problems of so-called cluster site apartment building shelters—lacking services, lax security—and posing new ones in the process.

One partial solution that is widely agreed-upon among advocates, legislators, and service providers is what's called supportive housing. The model is to build subsidized housing complexes with on-site medical and psychiatric services for homeless people with mental illness and other disabilities. The units are supposed to cost several thousand dollars less annually than the $37,000 spent to house a family in a shelter, not to mention the $112,000 a year it costs to imprison a person at Rikers.

And Governor Cuomo and Mayor de Blasio have actually promised to make this happen. Late last year and early this year, the mayor and the governor pledged to build 35,000 units of supportive housing over the next 15 years, doubling the current amount available, at an initial combined cost of $3 billion in public money. The $2 billion promised by Cuomo is supposed to cover the construction of the first 6,000 state-funded units, while the city's $1 billion and $1.6 billion from developers and tax credits are supposed to cover 15,000 units.

A new call for action by the advocacy group Coalition for the Homeless condemns Cuomo for dragging his heels on actually coming up with his piece of the money—it took him until June to line up a mere $150 million of starter funding, and the legislative session ended without a required contract between Cuomo and the heads of the state Assembly and Senate to let the rest go.

"The governor’s pathetic offer to provide a tiny fraction of what he promised underscores the shallowness of his commitment to housing our homeless neighbors," said Shelly Nortz, deputy policy director for the coalition, in a statement earlier this summer. She added, "Each month that passes, we see his promise to fund 20,000 units of supportive housing get whittled further and further down. If we wait another week, he’ll be asking the homeless to pay for their own programs. This is shameful." 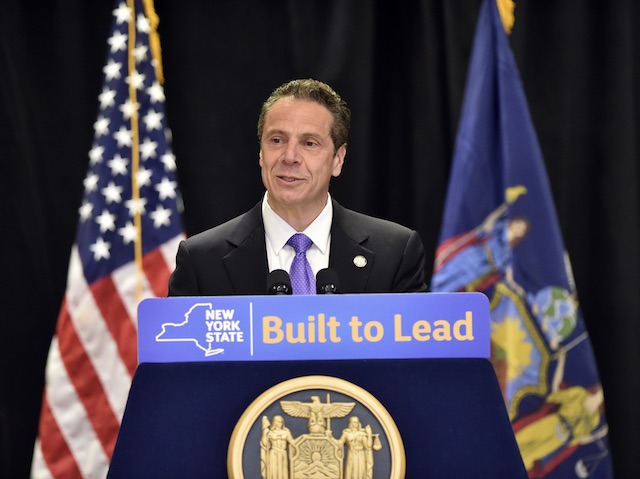 The delay in funding is "baffling to us since the governor has come out and said he's committed to this," coalition policy director Giselle Routhier told Gothamist. "That's why we've been continuing to press the governor."

Also in June, a 10-year city-state agreement for funding of supportive housing expired, and both Cuomo and de Blasio opted not to renew it, leaving the fulfillment of their promises reliant on their whims, and those of the legislative executives that will come after.

"The governor did release $150 million," Routhier said. "That's not sufficient for long-term planning, or for the developers who are going to take the risk and build." The previous arrangement, the third of what were called New York/New York Agreements, "provided that [financial] guarantee beyond any specific administration. In the absence of those agreements, the money needs to be identified."

The group's scathing report takes time out to praise de Blasio for funding the creation of 500 supportive apartments in existing buildings, identifying long-term capital funding for the other units he pledged, and making progress in helping homeless New Yorkers find permanent housing—more than 1,200 single adults in fiscal year 2015—with his new voucher programs. Another 3,000 single adults made it into existing supportive housing that year.

Still, the shelter system is bursting at the seams, and only about a third of those who leave the system do so with the support of a voucher because of lack of funding for the programs, according to the report. Would-be tenants who do have vouchers also face rampant discrimination by landlords, despite a city law outlawing them from turning renters away based on their source of income. The average length of time that people are staying in shelters is also now at a record high 355 days. The percentage of people entering the shelter system who have previously been homeless is at a four-year low 41 percent, but the number of people becoming homeless for the first time is increasing, according to the report.

The authors applaud de Blasio's initial batch of supportive apartments for being on track to be completed by the end of the year, whereas Cuomo's new construction plans, even if fully funded, would not begin to bear fruit for two years.

It's unclear why Cuomo and his counterparts, Assembly Speaker Carl Heastie and Senate Majority Leader John Flanagan, continue to drag their heels on signing the required memorandum of understanding to unleash the promised $2 billion.

Cuomo spokeswoman Dani Lever told the Daily News, "It was the governor who advanced this unprecedented state investment in affordable housing and the $150 million earmarked for the first phase of supportive housing has been released for this year. The plan is on track and if that fact is not in this ‘report,’ then that speaks to the credibility of it and its authors." As noted above, the release of the small amount of initial funding is noted in the report and acknowledged by the coalition, so it's not clear what Lever is talking about.

This isn't the first time Cuomo has been, shall we say, creative with his financial commitments. Last year Cuomo, whose vindictive dislike of de Blasio is known across the land, pledged $8.3 billion to fund the MTA's five-year capital plan after two years of delaying and then squeezing the mayor to commit far more to the agency than the city had in the past. By this March, the money hadn't materialized and the MTA's chairman was publicly pleading for a concrete budget commitment, lest the authority "run out" of capital funds at the end of June. Had the Assembly not intervened, Cuomo would have continued to pledge the money without specifying how or when the state would come up with it, and required the MTA to completely spend itself dry before offering the first set of funds.

#affordable housing
#andrew cuomo
#bill de blasio
#budget
#Coalition for the Homeless
#empty promises
#homelessness
#housing crisis
#kicking the can down the road
#Supportive housing
#original
Do you know the scoop? Comment below or Send us a Tip