Over tinkling flatware at a Wednesday luncheon for the Association for a Better New York, Governor Andrew Cuomo made his second large investment announcement in two days—and the second without a specified public funding source. On the heels of his pledge to provide full scholarships to low and middle-income students attending CUNY and SUNY schools, the Governor announced his intention to overhaul John F. Kennedy Airport: the terminal itself, as well as the highways and modes of public transit that lead to it.

In addition to new lanes of traffic at "choke points" on the Van Wyck Expressway and at the Kew Gardens Interchange approaching the airport, Cuomo turned over the podium to outgoing MTA Chairman Tom Prendergast to announce two possible public transit options: expanded capacity on the AirTrain to JFK—longer trains, more frequent departures—or a considerably more expensive "one seat" ride from Manhattan to JFK, eliminating the AirTrain transfer altogether. Prendergast said the MTA would conduct a study on the latter option.

"[We will] explore the feasibility of a one-seat ride to JFK," Prendergast said. "Most of the airports in the world have that one-seat ride."

He also discussed a possible Jamaica Station overhaul, calling for a "much more sleek and modern experience" at the AirTrain transfer point—a "climate-controlled environment, with improved information about flights." 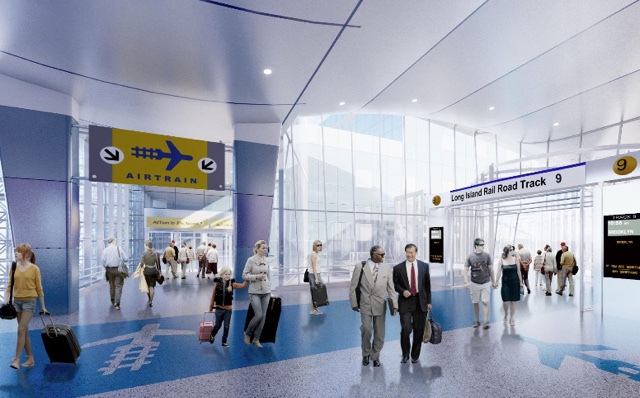 The (possible) AirTrain entrance of the future, at Jamaica Station (via Governor's Office).

The JFK redesign is the latest of Governor Cuomo's massive infrastructural pet projects, following 2016 pledges to overhaul Penn Station, LaGuardia Airport and the Javits Center. On Wednesday, Cuomo—who is likely considering a 2020 presidential run—reiterated his desire to compete not just nationally, but globally, challenging cities like Dubai and Shanghai. He reminisced about New York City's mid-century infrastructure push, when LGA and JFK were built.

"Since the '70s, what have we really done?" Cuomo asked, rhetorically.

Cuomo's approach to funding the estimated $10 billion JFK project would apparently be similar to that employed at LaGuardia Airport. In that instance, the governor established a public-private partnership with the private entity LaGuardia Gateway Partners (LGP).

"We can drive up to $7 billion in private capital [at JFK]," predicted Dan Tishman, CEO of Tishman Construction Company and the head of Cuomo's Airport Master Plan Advisory Panel. 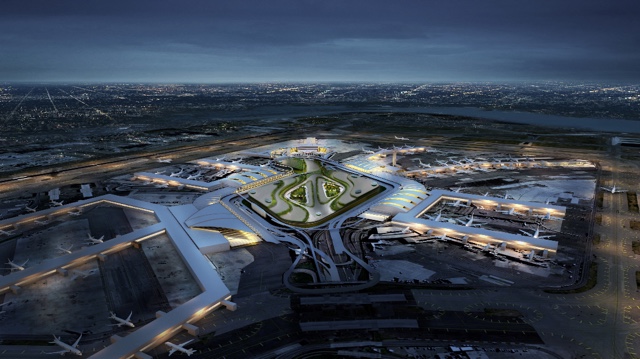 But public-private partnerships are not without their asterisks. Approving a $2.9 billion contribution to the estimated $4 billion LGA Terminal B overhaul last spring, Port Authority members parsed the fine print. At the time, Port Authority Board Member John Degnan argued that there "is no free money," pointing out that LGP will reap operating revenues from the new airport that, if the Port Authority had undertaken the project alone, would have gone back into public coffers.

According to the Governor's Office, the State Department of Transportation would invest $1.5 to $2 billion in the highway renovations around JFK. As for the MTA improvements, "On mass transit we don't have a number," Cuomo admitted. His office did not immediately respond to a request for comment on where additional funding might be sourced from.

Tishman also laid out recommendations [PDF] for the new JFK terminal on Wednesday. Echoing complaints about LGA's piecemeal design, he called for tearing down some terminals (including the older Terminals 1, 2 and 7) and renovating others to create a "cohesive, connected" airport. He also called for a so-called "ring road" around the airport, with larger, centralized parking lots. Longer taxiways for airplanes, and, following the false-alarm that sent JFK into lockdown mode in August, a more high-tech security apparatus with regular third-party reviews.

The plan is also heavy on the aesthetics and amenities. "We need world class amenities at all of JFK's terminals," Tishman said. "Fine dining, best-in-class retail, duty free, conference and meeting facilities."

As evidence to the contrary, he mentioned the just-debuted Second Avenue Subway extension, between 72nd and 96th Streets on the Upper East Side. "Anyone in Manhattan would have bet you that the Second Avenue Subway would never be on time," he said. There was no mention of the project's ballooning timeline and costs, nor the uncertain future of its next proposed phase, which would extend the line up to 125th Street in East Harlem.