In a bit of inspired posturing that would have sinister and unconstitutional consequences if it was actually doable, Governor Cuomo has ordered New York City and other state municipalities to forcibly remove homeless people from the streets when the temperature dips below freezing, starting tomorrow.

To be clear, since the mid-1980s the city of New York has been legally obligated to provide a shelter bed for any person who seeks it, and some 58,000 people are currently residing in city-funded shelters. Those shelters are by and large privately run and have a dizzying array of problems, but they do exist.

Yet many of the few thousand people living long-term on city streets are doing so because, in addition to wage stagnation and the ever-increasing cost of housing, they are afraid of the conditions in shelters, they dislike or have difficulty with the regimented requirements of remaining in a shelter, and/or they have severe substance abuse or mental health issues.

Cuomo's executive order, issued Sunday [pdf], calls for local governments to take "appropriate steps, including involuntary placement" to move street homeless into shelters, and says that a provision of the state's Mental Hygiene Law that allows forcible institutionalization of people who pose a threat to themselves or others allows for a sweep of the streets. The order "direct[s] all local social service districts, police agencies including the New York State Police, and state agencies to take all necessary steps to identify individuals reasonably believed to be homeless and unwilling or unable to find the shelter necessary for safety and health in inclement winter weather, and move such individuals to the appropriate sheltered facilities."

In an interview with 1010 WINS's Kathleen Marple, Cuomo dismissed the complex, longstanding problems specific to homeless people living on the street and said that he can solve them with a few taps on his keyboard:

Now on the concern of "I don't want to go into the shelters because shelters are dangerous," that's just unacceptable. We want people to be sheltered in safe, clean, decent, well-maintained places and they will be. So it's not going to be somebody wants to stay on the street and freeze to death because they’re afraid to go into a shelter. We’re better than that, Kathleen. Everyone will have a safe, clean, decent shelter to go to.

In theory, the order applies to all municipalities, but in the text of the order and in subsequent interviews, Cuomo made it clear that the move is part of his interminable penis-measuring contest with Mayor de Blasio. Specifically, the order includes the line, "whereas, certain parts of the state are facing a crisis of homelessness unprecedented in recent history." In an interview with NY1, Cuomo dodged the very basic question of whether he had discussed this sweeping policy change that primarily affects New York City with its mayor, saying instead, "I think it is a fact that homelessness is on the increase in New York City. I think everybody recognizes that and I think everybody recognizes that that is a significant problem."

He went on to cite his experience drafting a homelessness plan for former mayor David Dinkins and his subsequent hiring at the federal Department of Housing and Urban Development as bona fides. Given his experience, Cuomo knows that no mechanism exists for forcible sheltering/imprisonment of homeless people, and that the institutional capacity, human-power, increased shelter budgets, and contracts cannot be produced out of thin air, never mind the not-small issues of due process and freedom of association that hindered a similar effort by former mayor Ed Koch in the 1980s.

It's also important to bear in mind in all of this that New York City homelessness worsened dramatically after Cuomo and former mayor Michael Bloomberg cut funding for the Advantage rent subsidy voucher back in 2011. 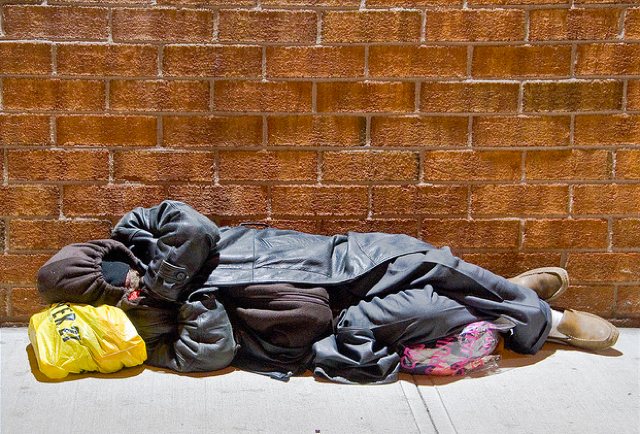 Yet, in a bit of "optics" jiujitsu, Cuomo's order places him in the position of caring for the homeless in the eyes of the casual news consumer and, if de Blasio resists, it makes him look like someone who doesn't.

So will NYPD cops start rounding up the street homeless and dumping them in hotels with armed guards stationed at the door, or failing that, will Cuomo send in the state police to do it for them?

The Mayor's Office told reporters that police and social service agencies are already doing homeless outreach, as they always do during cold weather, now augmented by the controversial HOME-STAT homeless-tracking program.

"We take anyone off the street we believe is in imminent danger," de Blasio told WCBS 880. "That’s something NYPD does. That’s something our outreach workers do through our Homeless Services department. So we have that capacity right now under state law—and we have done that for years and we will continue to do it."

Spokeswoman Karen Hinton told the New York Times that the mayor supports "the intent of the executive order, but to forcibly remove all homeless individuals in freezing weather, as the governor has ordered, will require him to pass state law."

Stating the obvious to the Daily News, she said, "This executive order adds no legal or financial resources to New York City's programs to assist the homeless," and interpreted the order to mean other cities in the state should follow NYC's high standard of admitting all people in need.

City attorney Zachary Carter issued a memo saying that homelessness or mental illness alone are not sufficient grounds to remove people from the street.

Talking to the Times, Cuomo lawyer Alphonso David backpedaled on the initial order, saying "obviously, the order does not mandate involuntary commitment for competent individuals," though obviously it does. He also teased that "this order is only a part of the state’s response to the homeless crisis."

The New York Post, too, continued its campaign of newfound, politically convenient concern for the homeless. A Post report involving six staff writers blew the lid off of two people sleeping on the steps of a Catholic church in Brooklyn Heights. The piece quotes neighbor Elizabeth McBride, who worries about the appearance of the encampment: “This is a historic area with lots of tourists, so visually, it’s not optimal."

The reporters go on to relate the reaction of a tourist couple from Altoona, Pennsylvania, who surely expected something different on their trip to the Big Apple. “It’s freezing out here, there’s crime...They should be in a real shelter,” Pat Irwin told the tabloid.

Not everyone is blind to the bureaucratic and legal problems posed by Cuomo's brinksmanship. Midtown-dwelling homeless man and rational thinker Luis Diaz told the Daily News:

Hell no, I won't go to a shelter! How’s that even lawful? You can’t force people off a public street. It’s going to be crazy. They don’t have enough room. They don’t have the infrastructure to do this. Where are they going to put us? If they’re shoving us in shelters with crazies and people who can’t handle being in there, there is going to be a lot of fights. We’re safer out here.