A former top aide to Governor Andrew Cuomo, who was known as his "enforcer," will be charged by U.S. Attorney Preet Bharara today. Joseph Percoco is accused of a bribery scheme that includes asking an energy company doing business with the state for a job for his wife. Apparently, Percoco came up with using the word "ziti" as code for money because it was used in the The Sopranos ("about 45 boxes of ziti").

News broke in May that Percoco was being investigated by Bharara's office, in addition to Kaloyeros and lobbyist Todd Howe. (Howe is now cooperating with the feds.) Percoco had worked for the governor's father, Mario Cuomo—Cuomo called him "my father's third son who sometimes I think he loved the most"—and worked for Cuomo's administration, leaving for a stint in 2014 to run Cuomo's re-election campaign, earning at least $220,000. He also took in anywhere from $70,000 to $120,000 from a developer and another consulting firm, who both "increased their donations" to Cuomo's campaign.

At the time, Cuomo addressed the investigation by saying, "I knew he might be accepting consulting arrangements with other companies but beyond that" he didn't know about the arrangements.

"When you leave state government you can work in the private sector and represent private sector companies," he said. "Yes, that's totally allowable."

This January, Percoco left the state government to work for the Madison Square Garden Company. 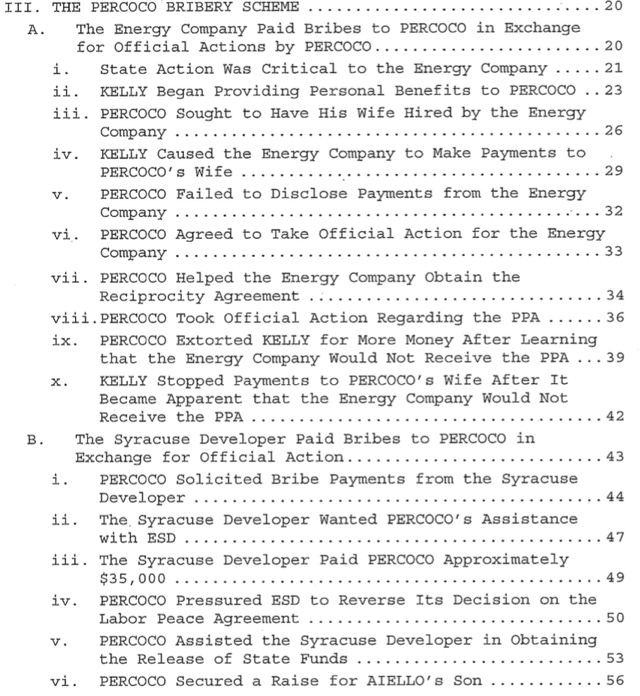 From the complaint's Table of Contents

The 80-page complaint against Percoco, Kaloyeros and others details kickbacks related to the Buffalo Billion project to spur economic development in the area. There's also much detail about efforts to secure Percoco's wife a job—apparently the Percocos were having financial issues after she left a NYC teaching job, with expenses of $20,000/month and income of barely more than $9,000/month. 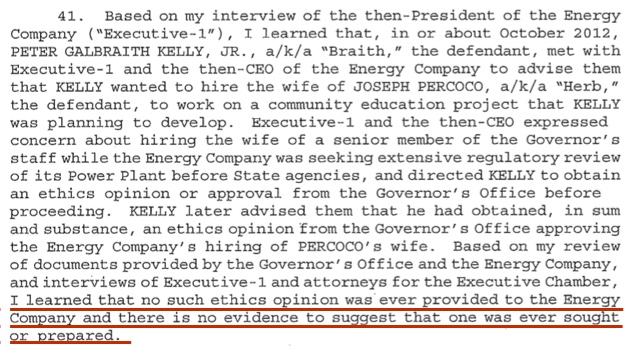 And here's the Sopranos reference: 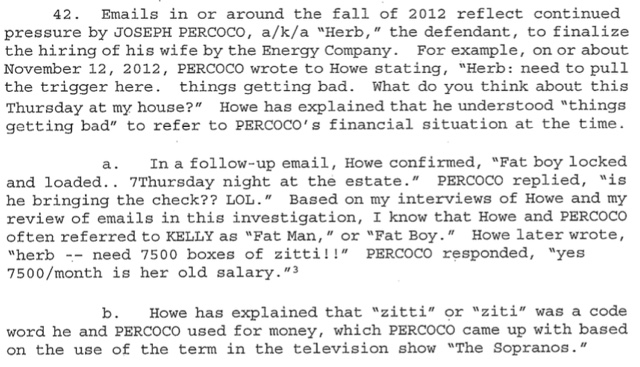 The energy company, Competitive Power Ventures, then created a program educating fourth grade students about its power plant, and gave Percoco's wife the job, feds claim. She sometimes would only work two or three hours a month, but was still allegedly paid that ziti. 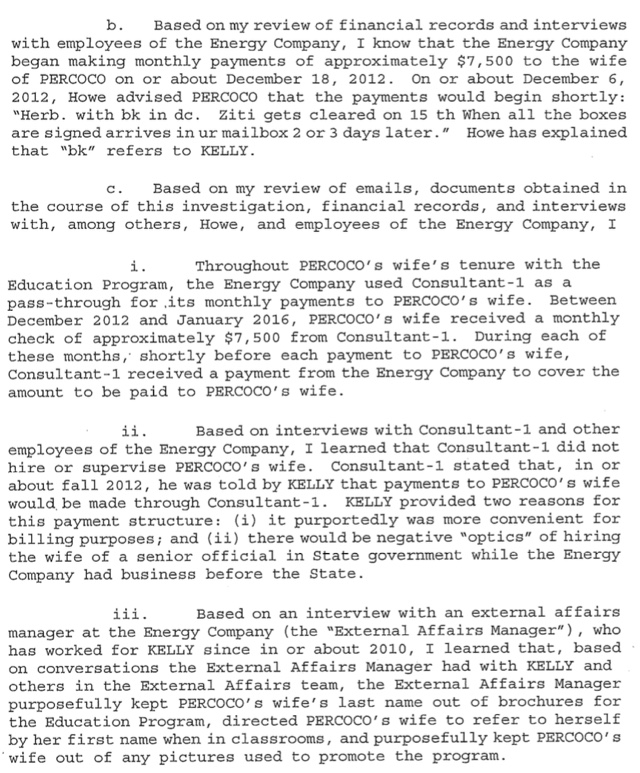 Excerpts from the federal complaint

Percoco then later took action on behalf of the energy company with the state, by agreeing to push its interest in front of influential decision makers. After Competitive Power Ventures didn't get what it wanted from the state, Percoco still allegedly "extorted" them ("fat boy" refers to CPV head of external affairs Peter Galbraith Kelly, who is also known as "Braith"): 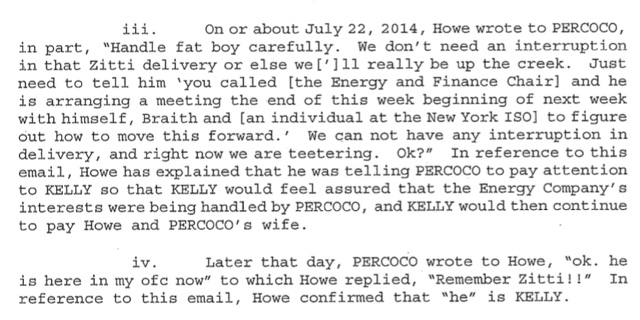 Percoco was seen as an extremely valued confidante of Cuomo. In a June profile, the NY Times wrote:

Theirs was a relationship built on nearly three decades of unswerving loyalty, absolute trust and near-constant interaction: It was all but impossible to imagine Gov. Andrew M. Cuomo without Joseph Percoco, his closest aide and the enduring mainstay of his life in politics. Interviews with two dozen former colleagues, political associates and Albany veterans depict

Mr. Percoco as the consummate logistics and operations ace, guided by the same get-things-done-now ethos as Mr. Cuomo. He was the verbal assassin, tearing down relationships one day and asking favors the next; the governor’s combination lieutenant and fishing buddy, to whom Mr. Cuomo could turn for a soothing dose of guy talk — and, when the job required, for political warfare.

As an enforcer and organizer, he was indisputably effective: helping to whip a slim majority out of a Republican-led Senate to pass statewide marriage equality in 2011; working to coordinate the state’s response to Hurricanes Irene and Sandy; and choreographing Mr. Cuomo’s events and, by extension, his public persona.

Bharara is holding a press conference at noon to discuss the charges.