Alain E. Kaloyeros, Governor Andrew Cuomo’s former “economic czar” and head of the Buffalo Billions program, was found guilty yesterday of rigging the bidding system worth hundreds of millions of dollars in favor of two companies that donated to Cuomo's reelection campaign. Louis Ciminelli, Steven Aiello, and Joseph Gerardi, the executives of the companies that received these contracts, were also found guilty of fraud and conspiracy.

Ciminelli and Aiello were the executives of the Syracuse based developer COR, and Gerardi was head of LPCiminelli Inc., a construction management firm in Buffalo. The two companies hired Todd Howe, a political operative who worked closely with Mario and Andrew Cuomo for decades, and Howe began consulting with Kaloyeros in 2011, when he was attempting to curry favor with Cuomo. Cuomo tapped Kaloyeros to lead the Buffalo Billions project, which pumped hundreds of millions of dollars in development to upstate New York companies. Howe, who was being paid $14,000 a month by COR, and a little under $8,500 a month by LPCiminelli, worked with Kaloyeros to ensure that the two companies received the contracts, and further contracts from the state.

They flagrantly rigged the bidding process, changing the Requests for Proposals to ensure that only these two companies would be eligible to bid on the projects. During the rigged process, emails showed them debating whether some requirements were too suspicious, like requesting specific project management software that COR used or by requiring 50 years of experience by a local developer. In October of 2013, when Howe emailed a draft request for proposal to Gerardi and Aiello, two weeks before the RFP went public, Gerardi sent back a handwritten note “too telegraphed??”

In 2013, the heads of the two companies and their families began pumping hundreds of thousands of dollars into Cuomo's campaign coffers, which Howe encouraged, according to the original federal complaint. These donations are not illegal under New York State law. 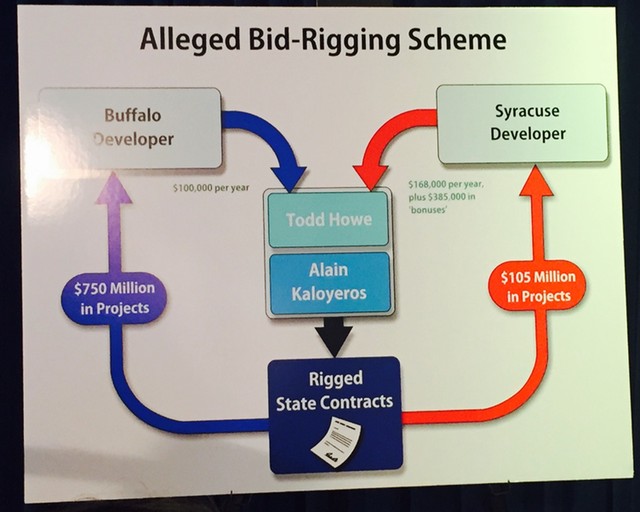 A diagram made by federal prosecutors in 2016 to show the alleged flow of money in a corruption scheme implicating Kaloyeros and two members of Governor Cuomo's inner circle. (Joshua Keefe/Gothamist)

In the fall of 2015, when the FBI interviewed other companies that were interested in bidding for these state contracts, Kaloyeros deleted incriminating emails from Howe from his Gmail account, including one that promised to “fine tune the developer requirements to fit.”

(Governor Cuomo, notably, doesn’t use email, and until May of 2015, the Governor’s office had a policy of deleting emails after 90 days.)

Howe took a plea deal in 2016, pleading guilty to eight felonies and agreeing to testify against Cuomo's longtime aide, Joe Percoco. He was expected to testify in the Kaloyeros trial, but prosecutors arrested him again in February after he violated the terms of his cooperation deal by committing credit card fraud.

Howe, Percoco, Kaloyeros, Ciminelli - hard to overstate how closely tied to Andrew Cuomo these individuals guilty of corruption involving state government have been.

“When Kaloyeros was entrusted by the State of New York to spend upward of a billion dollars of taxpayer money to prop up the economy of upstate New York, he turned around and shared the key to the vault with his friend Todd Howe and his clients,” said prosecutor Matthew Podolsky in a closing argument on Monday.

"Alain Kaloyeros is innocent," said Kaloyeros lawyer Michael Miller. "He did the best job he could for the state of New York... He's a good man."

Cuomo has not been charged with any wrongdoing, but he was very invested in this project. During Percoco's corruption trial, Howe testified that Cuomo yelled at him at a 2014 meeting when a deal for a proposed new basketball stadium in Syracuse fell apart. During the Percoco case, Aiello was also found guilty of conspiracy, making this his second guilty verdict.

Cuomo's primary challenger, Cynthia Nixon, pounced on yesterday's verdict as a sign of incompetence or corruption at the highest levels of state government.

If Cuomo, a micromanager, didn’t know what Percoco & Kaloyeros were doing, that’s arguably even worse. He's either corrupt or spectacularly incompetent. Either way, the Buffalo Billion trials show nothing is going to change until we change who’s in charge. https://t.co/NWgfFRvyuA

Cuomo, who campaigned on the promise to clean up Albany, issued this statement in response to yesterday's verdict: "The jury has spoken and justice has been done. There can be no tolerance for those who seek to defraud the system to advance their own personal interests. Anyone who has committed such an egregious act should be punished to the full extent of the law."

The conspiracy and wire fraud counts each carry maximum penalties of up to 20 years in prison. The count of making false statements to federal officials is punishable by up to 5 years.

#Alain Kaloyeros
#buffalo
#buffalo billions
#Cuomo
Do you know the scoop? Comment below or Send us a Tip