Governor Andrew Cuomo's long-promised AirTrain will soon offer riders a badly needed rail connection between LaGuardia airport and a subway station. Yes, this particular station happens to be further from Manhattan than the actual airport, and the trip for most New Yorkers might actually take longer than it currently does, and the project's budget has quietly ballooned from $450 million to $1.5 billion—but look how sleek and white the damn thing will be! All aboard the governor's new Innovation-mobile, we're taking the scenic route!

The above renderings were released on Monday to celebrate new legislation signed by Cuomo that brings the AirTrain one step closer to reality. Under the new law, the state can seize city or MTA-owned public land necessary to build the transit link, clearing the way for an environmental review in the coming months. Construction is expected to begin in early 2020, and could be completed within two years, according to the governor's office.

The new connection will deliver commuters to the airport from the Willets Point station—which, again, is actually east of the airport, next to Citi Field. The governor estimates that the new route will reduce travel times between midtown Manhattan and the airport to under 30 minutes—working under the assumption that the journey from Penn Station to Willets Point on the LIRR takes 16 minutes, the route from Willets Point to LaGuardia takes approximately six minutes, and everything else works out more or less seamlessly.

It bears repeating that the governor has not set foot on a New York City subway train since 2016. 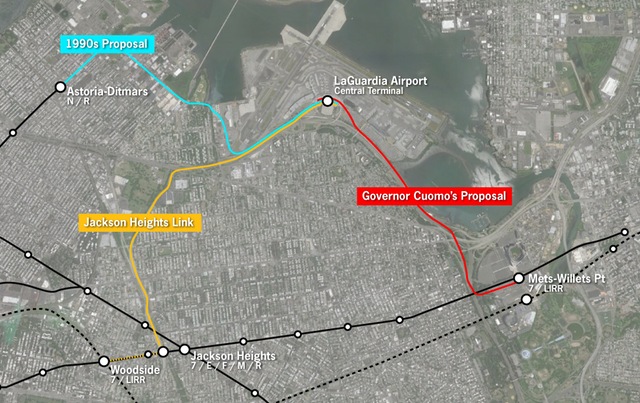 Transit advocates have widely belittled the project since Cuomo announced the route in 2015. According to calculations done by the blog Transport Politic, most people throughout the five boroughs will actually see their airport travel times increased by the rail link. That also goes for those who don't even take the AirTrain—the blog notes that "Given the fact that the AirTrain services would likely be automated, therefore reducing labor costs, it may be reasonable to assume that existing transit services to the airport would be eliminated to save costs. In other words, people may be forced to switch into the new, slower rail option."

Travelers still looking to get to LaGuardia via the AirTrain can also take the 7 train to Willets Point—an estimated trip of about 33 minutes from Grand Central. (Or even 42 minutes, according to the MTA's estimate this afternoon.) But local lawmakers have warned that the crowded 7 line can't handle many more passengers, particularly airport-bound riders carrying heavy luggage on stops past the airport.

In other words, it's very likely that New Yorkers not able to access a Long Island Railroad train from Penn Station will be better off doing whatever they're doing right now. However, the rare New Yorker who does not have to fly out of the beleaguered airport but just wants to watch the airplanes take off from inside a shiny sky-train will likely find the $1.5 billion project entirely worth it.

#airport
#airtrain
#Cuomo
#governor cuomo
#infrastructure
#laguardia
Do you know the scoop? Comment below or Send us a Tip