Governor Cuomo just gave his latest update on FRANKENSTORM Sandy's landfall and what it means to you. The big takeaways? "Don't be fooled don't look out the window and think it doesn't look so bad. The worst is still coming." Not scary enough? According to Cuomo and Howard Glaser, the Director of State Operations, tropical storm "Irene levels are currently being seen in the region right now" and winds and water are both expected to keep rising. "We don't want people to panic," the governor went on later. Still, "do not underestimate the storm. These forecasts for this surge are really extraordinary. They are talking about surges we've never seen before." 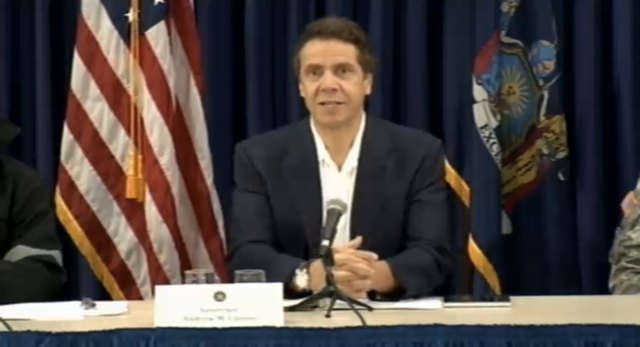 In further preparation for the worst that is apparently still to come, the state has preemptively decided to close both the Holland and the Brooklyn Battery tunnels today starting at 2 p.m. Both are prone to flooding, unlike the Midtown tunnel—though they will be monitoring that tunnel and the other area bridges, too. In addition the state has called up an additional one thousand National Guards. Also, while monitoring the storm surges, the governor says they're making sure the water equipment and rescue boats are constantly being redeployed as necessary.

Meanwhile, any other big tips from the Governor as Sandy approaches? "Leave the roads free," and please "you do not need to be going to the beach to take pictures, you really don't." (But if you do, send your disobedient pics to photos(at)gothamist(dot)com!)

#frankenstorm
#governor cuomo
#hurricane sandy
Do you know the scoop? Comment below or Send us a Tip