NY Governor Andrew Cuomo unveiled an ambitious plan to strengthen the state's bridges and tunnels as well as enhance their beauty yesterday, releasing a proposal called, "Reimagining New York's Crossings." Among the ideas: Replacing toll plazas with dramatic "veils" and chainmail "wave" structures, adding storm and earthquake protections, and illuminating bridges. Cuomo said, "Our crossings are all across the metropolitan area and we want to improve them in five ways—reduce the traffic, enhance the security, hardening and remediation, conservation and public art."

The most dazzling renderings were for the bridge illumination initiative; during the presentation Cuomo pointed to bridges around the world that have been beautified with LED lighting. "Our bridges are some of the most beautiful on the globe, just structurally. If they were illuminated, they could be breathtaking, and I believe they could be an international tourist attraction," he said. Cuomo asserted that the Bay Bridge lighting in San Francisco contributed to $100 million in economic activity. The governor also released a video, which, at 1:40, possibly jinxed a certain baseball team:

Our theme will be “The City that Never Sleeps.” They’ll be illuminated from dusk to dawn and just imagine the possibilities when you illuminate all of those crossings, they can all be choreographed, they can all be synchronized, they can all be the same color, they can operate in series—I mean, it is really limitless. We’re going to be adding the Port Authority George Washington Bridge, which is one of the magnificent bridges on the planet, and that will also be coordinated with the rest of the MTA bridges.

We can also coordinate with the buildings that are now lit and illuminate other buildings but the Empire State Building, the Freedom Tower—they are lit, they have this capacity, and we can coordinate with them because we need to do the work so the point is to actually do it right, and let’s do it the New York way and let’s lead.

The other big change will be the move to cashless tolls. EZ Pass users will pay their usual way while non-EX Pass drivers will get bills in the mail (photos of their license plates will be taken). Cuomo told the audience, "No more toll booths. No more stopping. We're projecting it'll save commuters 21 hours of drive time every year." 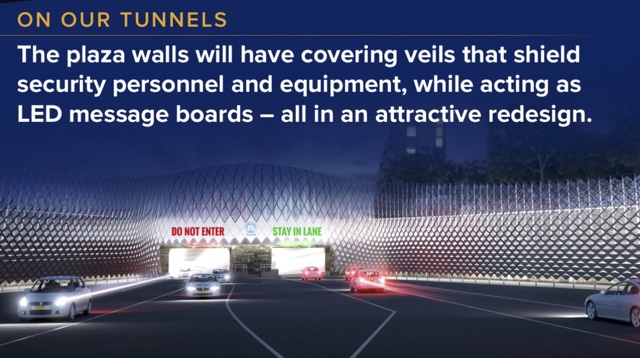 The NY Times reports: "In addition, eliminating tollbooth delays will conserve about one million gallons of fuel and save $2.3 million each year... AAA analyzed city toll data and found that on Labor Day, the use of cash tolls increased by 34 percent... leading to worse traffic and pollution."

New structures, called "veils," will also house and shield security equipment and cars. Cuomo described other components of the plan (you can see the press release here and read the presentation below), which include adding seismic retrofits of infrastructure built 50 years ago and tunnel barriers. Of Hurricanes Sandy and Irene, he said, "Our preparation was for a 100-year flood. It was not enough. It turned our tunnels into what looked like the canals of Venice underground. A gondola going down that canal would be fine, but we now need to redo our crossings for a 500-year flood scenario, and that means having barriers to block floodwater from entering the tunnels in the first place when the water gets that high."

The plan will cost about $500 million from the MTA's capital budget; Cuomo explained there would also be "$37 million annually for the security, which, I will defend that investment any day of the week. $100 million for the resiliency measures, which is federal money that comes from the Storm Recovery Funds, and the seismic measures are being paid for from the Structural Rehabilitation Fund. This is not a proposal. This is not an idea. This is not 'I think we could do this. I think it would be nice.' The funding is secured. Tom Prendergast has it in his back pocket. I know he does, and implementation is already underway. Many of the contractors have already been selected, and much of the work is already moving. So, this is going to be a reality."

#bridges
#crossings project
#governor cuomo
#MTA
#ny state
#tunnels
Do you know the scoop? Comment below or Send us a Tip