Governor Andrew Cuomo stood before a room of labor leaders and business interests at an Association for a Better New York breakfast Thursday, flashing a slide decorated with corporate logos: Blackstone, Estee Lauder, Hearst, MasterCard. For contributions in the hundreds of thousands of dollars, Cuomo said, private business can join these companies in a new initiative to sponsor subway improvements. A separate "adopt-a-subway" program will allow companies to sponsor individual stations.

It is "very possible" that companies could earn naming rights for stations, MTA Chairman Joe Lhota told reporters after the speech, though details are still being hammered out.

"Through this first-of-its-kind program we are giving private sector partners an opportunity to play a part in bringing our subway system into the modern age," Cuomo said. "We've done this in the parks system, and it worked."

Cuomo's latest funding proposal comes at a crisis point for the MTA, which has accumulated tens of billions in debt. Aging infrastructure has compounded delays underground, where conditions are cramped and increasingly dangerous. While guidelines for corporate MTA sponsorship have existed since 2013, transit experts said Thursday that the adopt-a-subway aspect of this latest proposal raises questions about equity.

"If you rely on private companies to make these improvements, you then run the risk of having improvements only made in specific areas," predicted Andrew Albert, a nonvoting member of the MTA Board. "You are only as good as your weakest link, so you really want system-wide improvements. I could name far-flung stations throughout the system that would be a hard sell."

Details on the adopt-a-station program are still sparse, though MTA Chairman Joe Lhota told reporters on Thursday that improvements at the station level will be aesthetic. Cuomo's speech before ABNY was more loose.

"The businesses can enhance those stations, enhance maintenance, enhance security, enhance aesthetics, bring art to the stations," the governor said. Companies will have the option to donate up to $600,000 per station depending on its size and traffic, he added.

Neither the MTA, nor the Governor's Office, immediately responded to requests for additional information on the amount of influence companies might have over individual station improvements, or the prominence of logos and advertising.

The separate Subway Partnerships Sponsors Council, compared to entities like the Central Park Conservancy, will require a buy-in of $250,000, Cuomo said. Businesses will likely focus on systemwide upgrades, according to a spokesperson for the Partnership for New York City, one of the groups that has already signed on. Here, as well, the parameters of the program are still being set.

"Our city's private and nonprofit sectors have expertise and resources that will supplement what government is doing, bring innovative ideas and expand support for the tough steps that are needed to modernize the system and generate more revenues," stated PNYC director Kathryn Wylde.

The nonpartisan Citizens Budget Commission recommended the model in a 2015 report, cautioning that "appropriate governance and regulation of these conservancies is required to avoid abuses and inequities among neighborhoods." 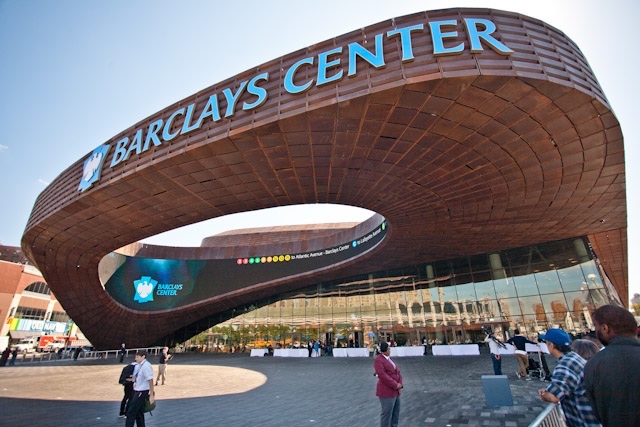 The MTA quietly released a request for proposals for corporate sponsorship back in 2004, in the face of a $1 billion budget gap. The MTA sold the rights to the Atlantic Avenue station in Brooklyn to Barclays in 2009, in exchange for $200,000 per year for 20 years (hence the Atlantic Avenue-Barclays station). And in July 2013, the MTA board approved guidelines for corporate sponsorship of subway or railroad stations.

"Requests for the re-naming of a facility will only be accepted from sponsors with a unique or iconic geographic, historic or other connection to such facility that would readily be apparent to typical MTA customers," the rules state. "An example would be a stop that is associated with a particular destination such that the vast majority of customers exiting at such station are headed to that destination."

"We can't have a McDonald's Station where the entity is geographically indistinct," said William Henderson, director of the watchdog group Permanent Citizens Advisory Committee to the MTA. "Maybe you could have Tiffany Station because it's geographically centered under the Tiffany store."

Whether companies will latch on to the adopt-a-subway concept in the first place is another question.

"It's been kicked around in the past, but from a company sponsor perspective, there has typically not been a lot of interest," said Jim Andrews, senior vice president of ESP, a corporate sponsorship consulting firm. "With a subway station you are taking on a little bit of risk, and most of these companies are risk averse. They prefer to take the safer route of a sports venue or a park. They don't want to be associated with a derailment."

The vaguely defined Subway Partnerships Sponsors Council makes more sense from a business perspective, Andrews said, because "there you are tapping into these companies' desire to be good corporate citizens."

Such is the case for Blackstone Group, a massive, New York based international investment firm that manages some $93 billion in properties. Blackstone is a favored affordable housing partner for New York City, despite criticism that it has taken advantage of low-income tenants.

"As a company founded and headquartered in New York City, we view it as our civic duty to contribute to initiatives such as this aimed at positively impacting the City, our employees, and our fellow New Yorkers," stated Blackstone spokesman Matt Anderson.

"The MTA should experiment with all sorts of ways for finding new revenue, but there is not substitute for a sustainable funding source that only Governor Cuomo can provide," challenged John Raskin of the Riders Alliance. "The core challenge facing transit riders today is where to find money to fix the system, and that's billions of dollars not thousands of dollars."

#Corporate sponsors
#governor cuomo
#MTA
#original
Do you know the scoop? Comment below or Send us a Tip