Governor Cuomo used his 2013 State of the State address yesterday to propose a ban that, if passed, would be the most restrictive ban on assault rifles in the nation. The state legislature banned assault rifles soon after the 1999 Columbine massacre, and in the wake of the horrific shooting at an elementary school in Newtown, Connecticut, it appears that lawmakers are poised to work with Cuomo on closing glaring loopholes in the ban.

Cuomo's proposed legislation is described as an "ironclad" ban on assault weapons and a ban on large-capacity magazines, which only six states have. (New York's current law, Cuomo says, "exempts magazines manufactured prior to 1994. Because magazines are not generally stamped with a serial number or other mark that would identify the date of manufacture.") The governor also wants buyers who purchase guns privately to undergo rigorous background checks intended to keep weapons out of the hands of the mentally ill and those with criminal records. 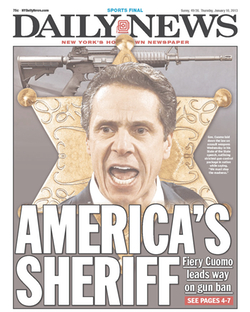 "Forget the extremists — it’s simple,” Cuomo said near the end of his nearly-80-minute speech in Albany. “No one hunts with an assault rifle. No one needs 10 bullets to kill a deer. End the madness now. This is not taking away people’s guns. It is about ending the unnecessary risk of high-capacity assault rifles.” Assembly speaker Sheldon Silver said last night that Cuomo and legislative leaders were “95 percent” of the way toward an agreement, and Republicans in Albany say they're not inclined to block the legislation.

Cuomo also dedicated part of his wide-ranging speech to marijuana possession. Since 1977, marijuana possession in New York State has been a misdemeanor for amounts of 25 grams or less, as long as it's not in public view. But police in NYC and elsewhere have widely disregarded this law, and in the last decade, the NYPD has made 400,038 lowest level marijuana possession arrests at a cost of $600 million dollars, according to the Drug Policy Alliance.

Yesterday, Cuomo noted the discrepancy in the law between public and private possession of small amounts of pot, and proposed standardizing penalties for possession. His proposal would to decriminalize marijuana possession that is in public view in quantities of 15 grams or less, reducing it from a misdemeanor to a violation punishable with a fine. Similar reform efforts died in the state Senate last year, despite endorsements from Mayor Bloomberg and NYPD Commissioner Ray Kelly.

"The legislature finds that arrests, criminal prosecutions, and criminal penalties are inappropriate for people who possess small quantities of marijuana for personal use," Cuomo declared. "Every year, this process needlessly scars thousands of lives and wastes millions of dollars in law enforcement resources, while detracting from the prosecution of serious crime. It’s not fair, it’s not right. It must end, and it must end now."

On the subject of Hurricane Sandy, Cuomo slammed Washington for dragging its feet in filling requests for disaster relief. "That is just too little and it is too late, and it has nothing to do with the way Congress has acted in the past,” Cuomo said. “This has long been established that in the face of a disaster, the national government comes in to help. Remember New York, because New York will not forget, I promise you."

The governor proposed a bailout fund for homeowners to help them relocate from flood-prone regions, as well as aid to help New Yorkers build homes to better withstand floods. He also called for flood-proof subways and bus terminals, and expressed interest in building costly storm surge barriers at the entrance to New York Harbor. "Climate change is real,” Cuomo declared. “It is denial to say each of these situations is a once-in-a-lifetime. There is a 100-year flood every two years now. It is inarguable that the sea is warmer and there is changing weather pattern, and the time to act is now."

And last but not least, Cuomo renewed calls for a referendum to allow more casinos upstate, arguing that they boost the economy and increase tourism. The governor said, for starters, that he wants up to three full-casinos upstate. None would be in NYC.

#andrew cuomo
#casinos
#gambling
#governor cuomo
#gun control
#marijuana
#state of the state address
Do you know the scoop? Comment below or Send us a Tip