Cuomo Says Subway Is Improving, You Just Have To 'Look Very Carefully'

Governor Andrew Cuomo, who loves cool cars and loud hogs, has a message for New Yorkers erupting into a homicidal rage while the best years of their lives wither up and die because of train traffic ahead of them: subway service is getting better, according to "people."

Talking to reporters in his Midtown office yesterday, Cuomo invited the press and the city's population descend into his unique vision of reality:

.@NYGovCuomo says "if you were looking very carefully" you will see that the subway has already improved.

Rather than leaving it at that, or citing any kind of numbers that would suggest things are looking up for the subways, the Daily News reported that Cuomo told reporters "people" were saying things are getting better, in a content-free stream of consciousness that if nothing else proves the man is ready to debate Donald Trump:

"But if you look closely, you see improvements. I mean, I hear from people who say the tracks look cleaner or the service seems better. So I'm hearing it already."

Cuomo, who hasn't taken a subway ride since he opened the 2nd Avenue line back in January (though he did post for photos with a subway vacuum recently), didn't go into who exactly he heard this from. Presumably it wasn't from anyone who experienced last week's broken third rail, this weekend's power failure stopping multiple lines from running into Manhattan or this guy carving out some personal space on a ridiculously overpacked M train on Monday: 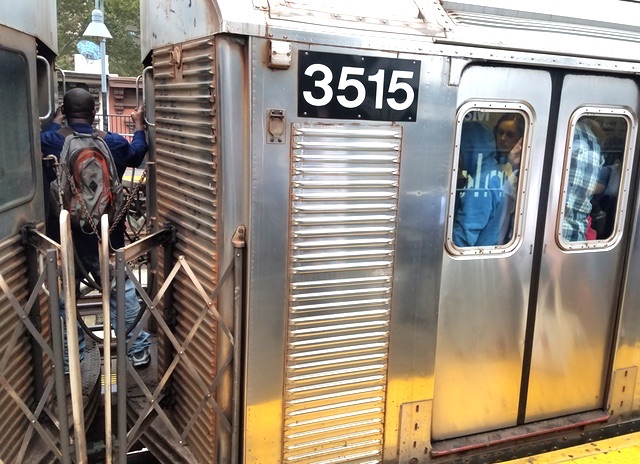 Or those who experienced subway delays and overcrowding yet again today:

Looking very carefully at the 2 train this morning, it does not appear to be moving.

Sitting on F train that has not been moving for some time, thinking of all the MTA improvements @NYGovCuomo says are happening.

While the first half of part-time MTA chairman Joe Lhota's plan for better subway service is currently being implemented, the long-term changes that will make things better for us have yet to materialize. Last time there was an update on the long-term fixes for the system, Lhota said that the plan wouldn't be revealed until he'd gone over the more than 400 entries in the governor's Genius competition.

The most recent MTA data regarding on-time service goes through June of this year, and shows that only the L train has managed to run on-time more than 75 percent of the time. Asked for additional data to back up Cuomo's assertion, an MTA spokesperson said, "We will be updating our board during committee meetings next week."

Detailed information about the service changes in effect in the E and the F while we work to address signal problems. pic.twitter.com/sKCDjLwjCC

to take a closer look

because it can't be

Following an earlier incident involving a train with mechanical problems at Franklin Av, 1, 2 and 3 train service has resumed with delays.

#andrew cuomo
#MTA
#people are saying
#subway
Do you know the scoop? Comment below or Send us a Tip