Governor Andrew Cuomo says he does not plan to return the $64,000 in campaign donations he received from President Trump over the years, despite mounting calls from his opponents to do so.

"I'm going to be deeply critical of him and keep the contributions," Cuomo told reporters on Thursday.

The money question was raised earlier this week by challenger Cynthia Nixon, who sent an email to her supporters hammering the governor over his past financial connection to Trump. "Trump knew that Andrew Cuomo was his best chance to retain the status quo in New York; so real estate developers and hedge fund managers could keep buying political influence and Cuomo’s corporate donors could avoid paying their fair share to fully fund our public schools," read the fundraising pitch, which was accompanied by a similar campaign on Facebook. 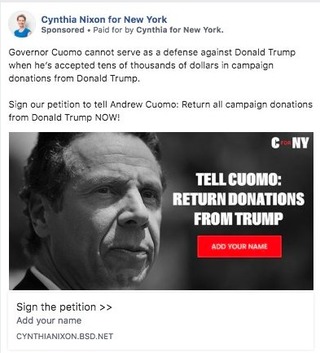 A new tactic from the Nixon campaign (via Facebook)

The contributions, just a fraction of the governor's $30.5 million war chest, were given to Cuomo campaigns between 2000 and 2009—the days when Trump was just a shady real estate developer building longterm relationships with lawmakers, so that, "When I need something from them, two years later, three years later, I call them."

It's hardly the first time that the governor's connection to unseemly funding sources has created tension in his own party. He was one of the only democratic lawmakers who initially refused to return the full sum of contributions from disgraced mogul Harvey Weinstein (only later, after he was blasted by the Republican party, did he reverse course). And back in 2010, after receiving an $87,000 contribution from the union-and-climate-busting Koch brothers, Cuomo refused the Working Families Party's pleas to return the money.

"I expect something in return," Charles Koch once said of his generosity.

Asked about the governor's history of taking cash from donors whose politics are antithetical to Democratic Party principles, Cuomo spokesperson Abbey Collins called the subject a "cheap distraction from a campaign gasping for air," and pointed to the fact that Trump considered running against Cuomo in 2014.

Nixon's campaign, meanwhile, has continued to press the issue, noting that 99 percent of contributions to Cuomo's campaign were in increments of $1,000 or more. The candidate and former actress has previously touted that she raised more small (under $200) contributions in one day then the governor has in seven years.

"Governor Cuomo cannot serve as a defense against Donald Trump when he’s accepted tens of thousands of dollars from him," said Nixon spokesperson Lauren Hitt.

Elsewhere in the Trump-Cuomo-verse, Nixon ally and former gubernatorial candidate Zephyr Teachout is calling on the governor to issue a criminal referral allowing Attorney General Barbara Underwood to investigate activities related to the Trump foundation. According to Pulitzer Prize-winning reporter David Cay Johnston, a referral from Cuomo would allow Underwood to open an investigation that could lawfully put the president's tax returns in the public record.

A spokesperson for Governor Cuomo did not immediately respond to a question about whether a criminal referral is forthcoming.