Governor Cuomo announced on Wednesday that he is spearheading a comprehensive overhaul of Penn Station. In conjunction with Amtrak and the MTA, the renovation will seek a private developer to convert the Farley post office building on Eighth Avenue into a grand, sun-soaked waiting area. Maybe this time the stories will be true?

The project—dubbed the Empire Station Complex—is estimated to cost more than $3 billion, with $2 billion going towards the Farley-Penn overhaul, and an additional $1 billion towards retail development along 7th and 9th Avenues.

Standing at a podium at Madison Square Garden this afternoon, the Governor had no shortage of insults to toss at the dark and often packed "warren" which commuters are forced to squeeze through.

"Penn station is un-New York," he said. "It is dark, constrained, ugly, a lost opportunity, a bleak warren of corridors… a miserable experience and a terrible first impression."

About $325 million is expected to come from the government, split between the Department of Transportation, Port Authority, and Amtrak. The rest will be privately funded, in exchange for interest in the revenue generated long term by retail and commercial rent. 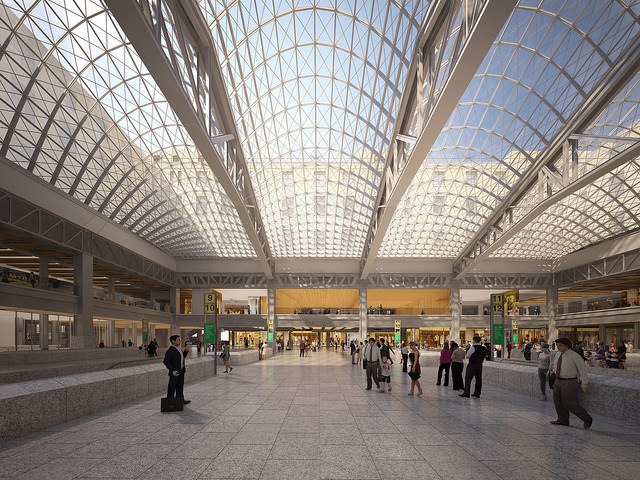 What is that weird light doing in the future Penn Station?

The Farley conversion, to be dubbed "Moynihan Train Hall" according to Politico, would be the realization of the significantly stalled Moynihan Station project.

Acknowledging that such an overhaul has been a long time coming, Cuomo said that the project would be expedited, and completed within three years. The Farley renovation is slotted for completion first.

According to the Governor's office, the new hall at Farley will increase the size of Penn station by 50 percent, and will be comparable in size to the main room at Grand Central. An underground "link" will ultimately connect Farley to the existing Penn Station building under Eighth Avenue.

The Governor walked through a handful of tentative redesign proposals for Penn Station itself in broad strokes this afternoon.

In one scenario, the Madison Square Garden Theater on Eight Avenue would be removed entirely, in what Cuomo described as a "friendly negotiated condemnation and removal." The demolition would allow for a possible block-long entrance to Penn Station across from the post office building. This proposal is similar to one put forth by the Municipal Art Society in 2014, and would theoretically yield a new space with abundant space and natural light.

Another option would involve temporarily shutting down the 33rd Street block of the station, and constructing a massive, glassy new entrance with accompanying skylights.

Developers could also leave the exterior of the station largely unaltered, "improving the configuration of the interior" with wider concourses, new signage, and integrated wifi, according to the Governor's office. 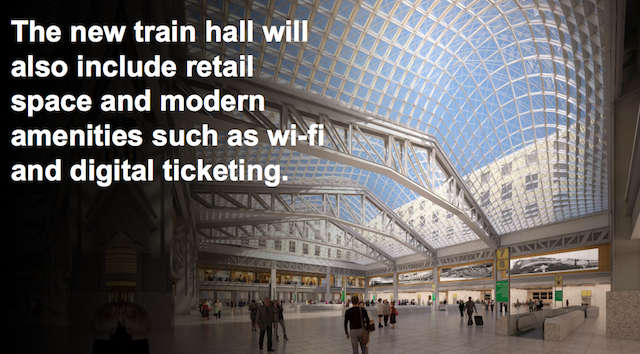 A rendering of the Farley post office building, re-imagined as a grand hall (Governor's Office).

The Farley overhaul and Penn renovation may be carried out by one private developer, two, or a small coalition. In the case of Farley, the developer will earn full retail rights inside the space. Cuomo announced that his office will be issuing solicitations to private developers this week, which will be due back in three months.

Citing anonymous sources close to the Governor, the Wall Street Journal reports that such a renovation could lead to the severing of a decade-old agreement between Penn Station and private developers Vornado and the Related Cos., who had initial plans to renovate the post office building into a station. However, the sources told WSJ that the cost of severing that agreement would be small "relative to the overall project."

Municipal Art Society executive director Mary Rowe said, "We echo the Governor's conviction that Penn Station is in need of urgent and ambitious change… finishing the Moynihan project and relocating the MSG theater is critical to improving Penn Station."

However, "In the long term, these improvements won't be enough to fully address Penn Station’s severe overcrowding or meet the growing needs of its rapidly developing neighborhood and our regional economy."

Mayor de Blasio did not attend the announcement, which is no surprise given the strained relationship between the governor and mayor.

De Blasio spokesman Wiley Norvell stated this evening, "These are improvements the City has been pushing for over the past two years, and we’re glad to see the State stepping up with renewed commitments. It's going to take the City, State and Federal governments working in close cooperation to make an expanded and revitalized Penn Station a reality. Together, we can deliver the 21st century transportation system New Yorkers deserve."

#Farley
#governor cuomo
#Moynihan Station
#penn station
Do you know the scoop? Comment below or Send us a Tip